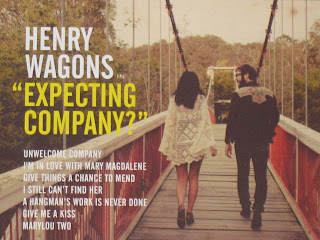 No other performer excites me these days quite like Henry Wagons. Rumble, Shake And Tumble, the full-length album from 2011, is full of great tunes and delicious, somewhat twisted energy. That year I saw the band perform at a small venue in Los Angeles, and it was one of the best concerts of the year.

So I was seriously thrilled to hear the new solo EP by Henry Wagons. Titled Expecting Company?, this collection of seven songs confirms his place as one of the most exciting musicians around. I’m completely sold on this guy’s talent, and I’ll definitely be paying close attention to everything he does from now on (well, everything he does musically, that is). All of the material on Expecting Company? is original, and Henry plays most of the instruments on these tracks. Si Francis joins him on drums for four of the songs.

One of my favorite elements on this album, however, is the female vocals. Most of these tracks are duets, and the vocalists are all impressive. The more I listen to this album, the more entranced and enamored I become.

There is a great freedom in this album. Henry clearly is not trying to restrain himself, but gives his creativity free rein. And it bounds in several directions, finding a temporary home in the late 1960s – at least on a few tracks. But there is country and folk here as well. What amazes me is that he does everything so well. It’s like each experiment pays off. I feel like if he were Frankenstein, his monster would have turned out just fine.

By the way, check out the cover. With the title in quotation marks, and the songs listed on the front, it totally fits with the 1960s feel of several of the tracks.

Expecting Company? opens with “Unwelcome Company,” which has an intense late 1960s feel. You expect sexy go-go dancers with light playing on their torsos to rush into your room brandishing guitars and silver pistols. Two quick drums rolls open the song like machine gun bursts. And Henry sings, “The gentle patter of angel’s toes/Circle round my bedside and brush against my nose.” It sounds a bit like something from Wild In The Streets.

And then Alison Mosshart comes in on vocals. She sounds like a sex kitten who will tear you to pieces with her claws and leave you smiling. She’ll betray you, and you can’t fault her. And when they sing together it’s like the Airplane was hired to do a soundtrack for a weird film. It’s when Henry sings, “Everywhere I go they follow/Everywhere I go they follow me” that he returns to familiar ground. But only briefly. I love those short spurts of electric guitar. Basically, this song blew me away.

“I’m In Love With Mary Magdalene”

“I’m In Love With Mary Magdalene” also has that sort of feel, while adding to it that familiar country rhythm, though then taking it and twisting it into a strange tale of lusting for Mary Magdalene. Henry sings, “Spent all night immersed in prayer/Why must my mind always take me there” (and then Sophia Brous responds with similar lines: “Why must your mind always take you there”). There is actually something sexy about this song, due in large part to Sophia Brous’ vocals, which are amazing. And then it ends on such a pretty note.

“Give Things A Chance To Mend”

Henry Wagons switches to country for “Give Things A Chance To Mend.” But it’s the country of days gone by. We’re in another time, or rather Henry pulls that time to us to make it now. The song is a plea to take a moment and not to make a hasty exit from the relationship, but rather give things a chance to get better. It’s a cool love song. Grab a beer and think of that special, problematic someone. This one is a duet with Jenn Grant, who completely, perfectly captures that old feel. What a great voice. This tune also features pedal steel by Seamus O’Sullivan.

“I Still Can’t Find Her”

I love how low Henry’s voice gets on the opening line of “I Still Can’t Find Her”: “Blow the dust.” The more I listen to Henry Wagons, the more I’m impressed by his vocals. And he does some interesting stuff on this one. And I really like this section: “My mother’s cousin Deborah cheated on her husband Wayne/Wayne’s photo’s been placed by Bill/And that seems a little harsh to me, Debbie.” It’s Debbie’s name coming after that pause that cracks me up every time. That has to be one of the most effective uses of a pause ever in a song. And then to top it off, there’s a spoken word bit. That’s Robert Forster performing; Forster co-wrote this tune with Henry Wagons.

“A Hangman’s Work Is Never Done”

Things get a little strange with “A Hangman’s Work Is Never Done.” This is a wonderfully messed up tune, and will work well on a cool Halloween mix CD. Seriously. It’s a dark tune, but with a drum beat slightly reminiscent of something like “Radar Love” or “Ballroom Blitz.” There’s some killing toward the end. Patience Hodgson provides some excellent vocals.

“Give Me A Kiss” is more in the folk vein, but with a weird carnival waltz atmosphere. My favorite part is Gossling’s vocals. Holy moly, these two make quite a couple. Check out these lines they sing together: “Let’s stop this before it gets worse/There’s room for both of us in this hearse/Raise your glass now to this toast/Let’s split at this fork in the road.” I love this song, and I wish it were longer. I want more.

Expecting Company? concludes with “Marylou Two,” a sort of sequel to (or re-working of) “Marylou,” the final track from Rumble, Shake And Tumble. This one is more of an acoustic folk version, and as a result has an immediate and vulnerable feel. Basically, it’s like the very end of the original version, but expanded to a full song of its own. “And I can’t break free from you, Marylou.” This is also the only track that is not a duet.

Expecting Company? is scheduled to be released on January 22, 2013 on Thirty Tigers.
Posted by Michael Doherty at 2:30 PM