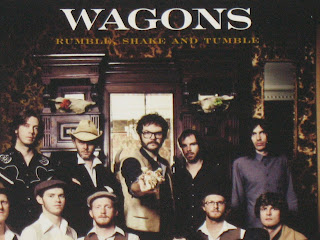 The new album from Australian band Wagons is bursting with attitude and energy, but also passion. Obvious comparisons can be made to Nick Cave, particularly in the vocals. But there are many other influences heard in this material, including the more interesting and darker side of country.

Henry Wagons wrote all of this album's songs, except "Willie Nelson," which was written by Anto Mac, Dominic Bourke and Henry Wagons.

Rumble, Shake And Tumble opens with "Downlow," which starts with a steady rock beat like something from The Knack. But when the guitar kicks in, it sounds very similar to Tom Petty. This is a song about keeping a love secret, with lines like "Working at the bar don't pay too good/Black sheep of the neighbourhood/Find a little a place without the booze and the fights/Out of the gaze of those prying eyes." It's not a bad song, but it's probably my least favorite from this album. The rest of the album is so much better.

"I Blew It" has a incredibly fun rhythm and good energy. From this song comes the album's title (in the lines, "Got myself in trouble/Rumble, shake and tumble"). I love Henry Wagons' vocals on this one. Sure, he's admitting his mistakes, but his voice is not full of regret (though he sings the line, "One thing I regret it's true"). Its more matter-of-fact. In fact, his voice is almost boasting rather than lamenting. And the music is pretty upbeat. It ends with the lines, "One thing just between you and me/We always knew I'd blow it didn't we/One thing I'll regret it's true/I blew it when it came to you."

"Moon Into Sun" is a country rock tune with kind of a sad feel and some good lyrics. Here is a taste: "Everybody tells me things will heal with time/But I have seen these hands spin a million miles/Please lift me from this downright funk/Douse my flames with a fire-truck." This track is quickly becoming a favorite of mine. Chris Altmann plays pedal steel on this track.

Right at the beginning of "Love Is Burning," I'm reminded of the Violent Femmes. This song sounds like it would be right at home on their New Times album. It has that raw, angry (yet still fun) drive. Though this song is more forceful than most of the material by the Violent Femmes (and has none of the whiny quality that characterizes some of their songs).

"My Daydreams" is actually a really sweet acoustic tune. It reminds me a bit of Son Volt - something in the voice at times - a slight mumbling element that Jay Farrar has. Henry sings, "We've both been down this road before/Throwing our love across the sea/One day soon it'll just be you and me/And 'til that day I'll hold you in my/Daydreams." I just wish they'd cut the backing vocals that repeat lines toward the end - they add a cheesiness that has no place in this song. This song is much better than that.

"Save Me" is my favorite track on this album. It's seriously catchy. You'll be singing along, and later when you're away from your CD player, this song will find its way into your head. I absolutely love this song, and welcome its intrusion into my thoughts any time. Check out these lyrics: "At the bottom of the ocean, the water's not blue/When you hit rock bottom, light don't seem to cut through/I feel like I'm drowning in the deep dark blue, but my heart's still beating and it beats for you." But it's the chorus you'll find yourself singing: "Save me, save me, I don't know what to do/I'm lost in the forest, can't find my way through/We're all lookin' for a path, some kinda clue, well my search is over, I'm following you."

The album concludes with "Marylou." Yes, it's about time that Marylou re-entered the world of song. That name used to grace many tunes. Then she disappeared for a while. And now she's back, and in great form. In fact, Henry sings, "And now you're back/Right in front of me."

Rumble, Shake And Tumble is scheduled to be released August 16, 2011 on Spunk Records through Thirty Tigers. It was released in Australia on May 6, 2011.

Wagons released Trying To Get Home in 2006.

I'm hoping Wagons will tour the U.S. again soon, because this is a band I absolutely have to see in concert.

(For those who are interested, check out their video for "I Blew It." Enjoy.)

Posted by Michael Doherty at 5:32 PM