Tony Bennett: "The Best Of The Improv Recordings" (2011) CD Review 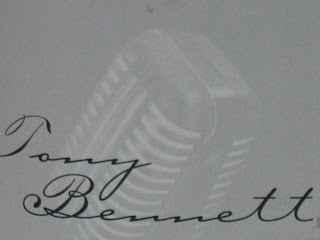 Tony Bennett has a great voice, and a great sense of romance. Those elements have kept fans coming back to his music for decades.

Improv is the name of the label that Tony Bennett and Bill Hassett created in the 1970s. This was after Columbia had treated Bennett poorly. Bennett had been eager to leave that label for years. But he finished out his contract with Columbia and then set about creating Improv. The problem with creating an independent label is distribution. Columbia wanted to act as distributor for Improv, but Hassett turned the label down. Improv lasted only a couple of years, but during that short time Tony Bennett made some of the best recordings of his career. This disc contains sixteen of those tracks.

"This Can't Be Love"

The album opens with a Rodgers and Hart tune, "This Can't Be Love," which was originally written for The Boys From Syracuse (which was based on William Shakespeare's The Comedy Of Errors). And it's a great tune. It's easy to see why Tony Bennett recorded two entire albums of this material. And it's the band that really makes these tracks wonderful, particularly Ruby Braff on cornet on this tune. They have a great jazzy groove going on in this rendition. The band is Ruby Braff on cornet, George Barnes on guitar, Wayne Wright on guitar and John Giuffrida on bass.

Here is a taste of the lyrics: "This can't be love/I get no dizzy spell/My head is not in the sky."

"Isn't It Romantic?" - another song written by Richard Rodgers and Lorenz Hart - features some great work on guitar, and a nice rhythm provided by John Giuffrida on bass. This song was introduced in the 1932 film Love Me Tonight. This beautiful version by Tony Bennett is from Tony Bennett Sings 10 Rodgers & Hart Songs.

Okay, I have to admit I had no idea that Rodgers and Hart had written "Blue Moon." Nor did I know that the song was written in 1934. How many covers have you heard of this song over the years? Everyone from Sha Na Na to the Cowboy Junkies have recorded it. From Elvis Presley to Mel Torme.

Tony Bennett's version is seriously cool, and it has the first verse, which is often left out. In case you haven't heard it, here it is: "Once upon a time before I took up smiling I hated the moonlight/Shadows of the night that poets find beguiling seemed flat as the noon light/With no one to stay up for I went to sleep at ten/Life was a bitter cup for the saddest of all men."

"Thou Swell" is a fun tune written by Rodgers and Hart. This one is from Tony Bennett Sings...More Great Rodgers & Hart, which features the same band as on the first record of Rodgers and Hart tunes. That is, Tony Bennett on vocals, Ruby Braff on cornet, George Barnes on guitar, Wayne Wright on guitar, and John Giuffrida on bass.

"You Don't Know What Love Is"

"You Don't Know What Love Is" is a bluesy number that features Bill Evans on piano. It's from an album titled Together Again, which was released in 1977. Four tracks from that record are included on this release.

Bill Evans has a really nice solo on "You Must Believe In Spring." And for those who can't get enough of Bill Evans, two other CDs were re-issued through Concord Music Group last month: Bill Evans Trio: Explorations and Cannonball Adderly With Bill Evans: Know What I Mean? (both of which have several bonus tracks).

"The Lady Is A Tramp"

"The Lady Is A Tramp" is a cool tune written by Rodgers and Hart, and driven by John Guiffrida's wonderful bass line. Tony Bennett has fun with this one. And there is some excellent work by Ruby Braff on cornet and George Barnes on guitar.

For those who might never have heard a version of this song (is there anyone who hasn't?), here is a bit of the lyrics: "She likes the theatre, but never comes late/She never bothers with people she hates/That's why the lady is a tramp."

"As Time Goes By"

"As Time Goes By" is one of the greatest songs ever written. I never get tired of this one. It's been covered by many artists over the years including Bing Crosby, Frank Sinatra, Sammy Davis Jr and Willie Nelson. It was famously used in what is possibly the best film ever made, Casablanca. There was even an excellent British television program named after this song - starring the amazing pair of Judi Dench and Geoffrey Palmer.

Tony Bennett's version is perfect, just perfect. This is from his 1975 release Life Is Beautiful. His band on this one was Torrie Zito on piano, John Giuffrida on bass and Chuck Higgins on drums. The orchestra was arranged and conducted by Torrie Zito.

And for the one person on the planet who isn't already familiar (and in love) with this song, here are some of the most famous lyrics ever penned: "You must remember this/A kiss is still a kiss/A sigh is just a sigh/The fundamental things apply/As time goes by." "As Time Goes By" was written by Herman Hupfeld.

This collection concludes with two live tracks from Tony Bennett/The McPartlands And Friends Make Magnificent Music (1977). The first is "While We're Young," a song written by Alec Wilder, Bill Engvick and Morty Palitz. Marian McPartland plays piano on this track.

The second is very short but energetic rendition of "I Left My Heat In San Francisco" written by George Cory and Douglass Cross. This is a song that Tony Bennett has performed often in concert, and he really belts it out in this version. The band for this track is Tony Bennett on vocals, Marian McPartland on piano, Jimmy McPartland on cornet, Vic Dickenson on trombone, Spider Martin on saxophone, Buddy Tate on saxophone, Herb Hall on clarinet, Charlie Byrd on guitar, Brian Torff on bass and George Reed on drums.


The Best Of The Improv Recordings is scheduled to be released July 12, 2011 through Concord Music Group. All of the tracks on this album are also available on a 4-CD box set titled The Complete Improv Recordings.
Posted by Michael Doherty at 8:04 PM