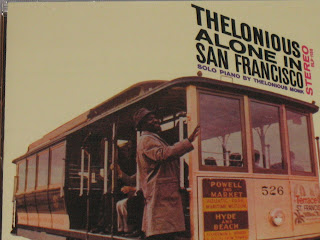 Recorded in October of 1959, Thelonious Alone In San Francisco was Thelonious Monk's second solo album (his first being Thelonious Himself, from 1957). There is something almost casual about these recordings. It's like he's playing in your parlor, maybe taking a few requests, or perhaps just playing whatever occurs to him. There is nothing ostentatious or showy about his playing. He's not trying to prove anything here. After all, by this point it was already acknowledged that he was an excellent musician. Having performed with The Coleman Hawkins Quartet and Miles Davis, and having released approximately a dozen albums of his own, Thelonious was already well known.

And though Thelonious Monk has played with some incredible musicians, you won't miss any of them when listening to this recording. This album feels intimate in a way that a lot of jazz doesn't. If you're not already familiar with Monk's music, this is a wonderful way to get to know this amazing musician's material. And if you are familiar with his work, you're going to really enjoy the renditions included here. Several of these tracks are definitely on the mellower side, adding to this album's intimate feel. This special re-issue includes a bonus track - an alternate take of "There's Danger In Your Eyes, Cherie."

This album starts off with "Blue Monk," one of his coolest, most well known compositions. It was included on Monk's 1954 release Thelonious Monk Trio. Live versions were included on his 1958 record Thelonious In Action and on Thelonious Monk Quartet With John Coltrane At Carnegie Hall (2005). Another version was also included as a bonus track on The Thelonious Monk Orchestra At Town Hall (1959). From the very first notes, this song will be familiar to even the most casual of jazz fans.

"Ruby, My Dear" is one of Monk's prettiest tunes. A version of "Ruby, My Dear" was included on Monk's Music (1957), which was re-issued earlier this year through Concord Music Group. (That version features Coleman Hawkins on tenor saxophone.) It was also included on Thelonious Monk With John Coltrane (1957). The version included on Alone In San Francisco has a more immediate feel, and even a brighter tone at times.

The first is "Everything Happens To Me," a wonderful tune written by Matt Dennis and Tom Adair. A song Thelonious Monk played often in concert, and one he clearly has love for, this version is simultaneously beautiful and playful. It was also included on his 1965 release Solo Monk. The first recorded version of this song was by The Tommy Dorsey Orchestra. It's also been covered by Billie Holiday, Ella Fitzgerald and Nat King Cole, among others.

Other covers on this release include "You Took The Words Right Out Of My Heart," written by Leo Robin and Ralph Rainger, and "Remember," written by Irving Berlin. "Remember" has also been covered by Ella Fitzgerald and Frank Sinatra.

"There's Danger In Your Eyes, Cherie" was written by Jack Meskell, Pete Wendling and Harry Richman. An alternate take of this song is included as a bonus track.

"Bluehawk" is a catchy, fun number. The joy in his playing is contagious. And maybe that is partly because this song was new at the time of this recording, and he had a lot of exploring still to do within its framework. This is the first album to feature this song.

The original album concluded with "Reflections," a song that was included on Sonny Rollins' 1957 record, Sonny Rollins, Vol. 2 (Thelonious Monk plays on that record, which includes a second Monk composition - "Misterioso"). This is another of his most beloved compositions, and the version here is a pure delight to listen to. There are moments on this track when Thelonious seems ready to burst into a higher energy realm, like he's ready for the band to rejoin him.


Thelonious Alone In San Francisco was released on June 14, 2011 through Concord Music Group as part of their Original Jazz Classics Remasters Series. Five other CDs in that series were also released on that date: Chet Baker: In New York, Ornette Coleman: Something Else!!!!, Cannonball Adderly with Bill Evans: Know What I Mean?, Bill Evans Trio: Explorations, and Ella Fitzgerald and Joe Pass: Easy Living.