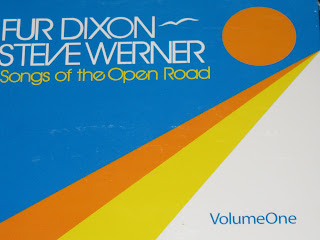 Though the majority of songs they perform in concert are originals, Fur Dixon & Steve Werner have always chosen some wonderful tunes to cover. So it seemed only natural that they should eventually release an album of covers. And that is exactly what Songs Of The Open Road Volume One is. The album's title is no false promise. These are songs of the road, of the land, of travel.

As they generally do in concert and on their original CDs, they trade off lead vocals, track by track.

Fur Dixon & Steve Werner open Songs Of The Open Road Volume One with "Southbound," a wonderful tune written by Doc Watson and Merle Watson. This is a perfect song for this duo, as it's about being stuck in a city, listening to the sounds of trains. These are themes and images these two are drawn to again and again. Steve does the lead vocals on this one, and I absolutely love the way he sings it. Brantley Kearns plays fiddle on this track.

"I Like How I Feel" is a sweet, slow love song written by Randall Lamb. I can't get enough of Fur singing the slower tunes. They're among my favorites of their original material, and Fur does an excellent job with this song. It starts, "My eyes are on the road/My hands are on the wheel/When I'm with you/I like the way that I feel." Again, these lyrics fulfill the promise of the album's title. Fur Dixon & Steve Werner often sing of traveling; in fact, their previous album was titled Travelers.

John McDuffie plays pedal steel on this one.

"Do Re Mi" is a song that Fur Dixon and Steve Werner often perform in concert. Steve has said it's his favorite Woody Guthrie tune. Those of us who live in California find these lyrics sadly still accurate and relevant: "California is the garden of Eden/A paradise to live in or see/But believe it or not/You won't find it so hot/If you ain't got the do re mi."

Otoño Lujan plays button accordion on this track. Tony Zamora plays guitarron. They give the song a happier, almost celebratory feel, which is a wonderful juxtaposition with the desperation and cynicism (read that as realism) of the lyrics. I also love what Steve does on guitar on this track.

"Dreary Black Hills" is a traditional folk song that is incredibly pretty. I know I've said it before, but Fur has such a great voice. And it's so well suited for traditional, timeless folk songs.

"Waitin' For The Hard Times To Go"

"Waitin' For The Hard times To Go" is one of those great sad folk tunes full of yearning. Steve sings it with just the right emotion in his voice. It was written by Jim Ringer. Here is a taste of the lyrics: "I need someone to talk to/But I want you to know/I ain't putting you down/But I don't like your town/Just hanging around/Waiting for the hard times to go."

"Clay Pigeons" is a wonderful song written by Blaze Foley. Fur's voice is so sweet, even on what could be a silly line like, "Go where the people say 'y'all'." This song really captures what Fur Dixon & Steve Werner are all about, especially in lines like "Singing songs for the people I meet" and "Singing songs with a friend." Music always seems the best way of communicating - because it's not just thoughts, but emotions that are conveyed. And people are more able to hear you if they can feel what you're saying. Perhaps that's why everyone who hears Fur Dixon and Steve Werner immediately thinks of them as friends.

"De Colores" is a surprise. It's a traditional tune, sung completely in Spanish. Steve sings lead, and does a great job with it. There is an undeniable beauty to this song. Otoño Lujan plays accordion on this track.

"The Dealers" and "Prairie In The Sky"

The only songwriter to be represented twice on this album is Mary McCaslin. This is another surprise. Those who have seen Fur & Steve in concert might expect two Woody Guthrie songs, or two Johnny Cash songs to appear on this release. Mary McCaslin is known not only for her songwriting, but also for her interesting covers of folk, pop and rock tunes. She also performed and recorded with her husband, Jim Ringer (who wrote this album's "Waiting For The Hard Times To Go").

Steve Werner takes lead vocal duties on "Prairie In The Sky." John McDuffie plays pedal steel on this one. Tom Russell and Bill Staines have also covered this song.

"I Cannot Settle Down"

The album concludes with "I Cannot Settle Down," an excellent folk song written by Dan Janisch. Fur sings lead on this one. Steve joins her on the chorus: "But you see I cannot settle down/There's just so much that's left unfound/So I'll keep drifting like a cloud/On the wind, on the wind." A perfect ending to this collection of songs about the road. Paul Marshall plays auto-harp on this track. Steve Werner plays banjo.

Fur and Steve show no signs of slowing down, and for that I'm grateful. The "Volume One" in the title implies more to come. Here are my requests for volume two: "I'll Fly Away," "I Got Stripes" and "This Land Is Your Land," all three being songs they cover in concert.

Fur Dixon and Steve Werner put on a wonderful show. They don't really tour much outside of the Los Angeles area (despite the majority of their material being about traveling), so you have to come out here. It would be worth the trip to see them - even if you did nothing else while you were here.

Songs Of The Open Road Volume One was released February 1, 2011 through Grass And Gravel Records.
Posted by Michael Doherty at 5:09 PM