The Greencards At The Mint 7-5-11 Concert Review 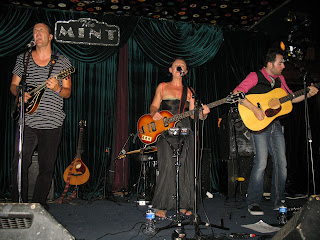 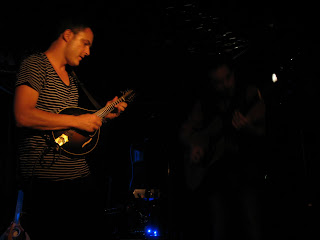 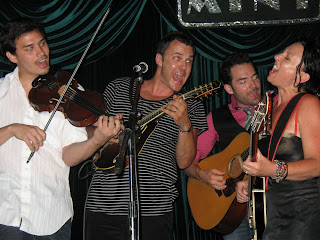 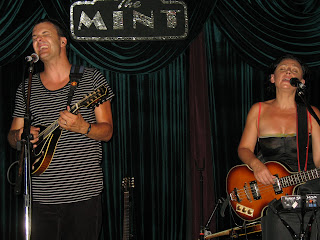 Last night The Greencards became one of my favorite bands. I reviewed their most recent CD, The Brick Album, and really enjoyed it, so I had fairly high expectations going in. But their live show blew me away. Seriously, check out the rest of their tour schedule, and if they're coming to your area, make sure you see them. Cancel weddings, funerals, whatever else you might have going on, and go see them. This goes doubly for folks who are fans of bands like Yonder Mountain String Band - you guys will love The Greencards.

There was an extended soundcheck due to some issues with the mandolin. Clearly these guys wanted to get everything sounding just exactly right. Still, they started their set at 9:46 p.m. (the venue's web site listed their start time as 10:00 p.m.). They kicked off their set with a great energetic version of "Rivertown" from their 2009 release, Fascination. From there, they went into "Faded," a wonderful tune from The Brick Album (2011). "Faded" led directly into "Spicy Dry Noodles," an instrumental tune featuring guitarist Carl Miner.

In addition to being phenomenal musicians, these guys have a great rapport with their audience. In introducing "Make It Out West," Kym talked about Sam Bush's guest appearance on the album's version - New Grass Revival admittedly being a big influence on this band. "Make It Out West" was also inspired by Ron Blair, a member of Tom Petty's band who was a bikini store owner for a while before rejoining the Heartbreakers. It's the opening track of their newest album. They followed that with what is becoming my favorite track from that CD, "Girl In The Telescope." I love Carol's vocals on that one.

During "Weather And Water," the sound problem they'd hoped they'd fixed during the soundcheck re-occurred, the mandolin popping. But that was really the only sound issue during the entire set.

"Roll On Buddy, Roll On" was one of the few covers of the night. The Greencards' version included a cool jam. After that, they talked about The Brick Album, explaining how it was funded by fans who bought "bricks" bearing their names. Kym joked about how the band is really its own boss, and so they had had a meeting with themselves, and had asked themselves for a raise, but told themselves they really can't afford that right now.

Toward the end of the set, Tyler and Carl left the stage, and Kym and Carol did a seriously sweet cover of Cheap Trick's "I Want You To Want Me." The audience sang along, and it was a wonderful moment. Then Kym and Carol stepped off stage, and Tyler and Carl did an instrumental tune titled "Scuttle Buttin'" a Stevie Ray Vaughan song. This song contained a "Day Tripper" tease.

The set ended with an incredible rendition of "You Pulled Me Out" from their 2003 release Movin' On. There was a really nice long extended jam in the middle of the song with each band member taking a turn at lead. This jam included "Ghostbusters" and "Billie Jean" teases.

The Mint is a nice venue, but they definitely need more light on stage. Basically Kym was the only band member who was well lit the entire show. The others had to step to the very front of the stage (or step over to Kym) to be in the light. (Of the photos I've included in this review, only one wasn't with the flash. Guess which one.)

One thing that impressed me about The Mint was the fact that the show started on time. Acually, the first opener - Sierra Lynn Danger - went on two minutes before her scheduled 8 p.m. start. I really dug her set. She's part Ani Difranco, part Liz Phair, part Wavy Gravy. In her animal print leggings, Alice Cooper t-shirt, and nose ring, she leads you to expect a defiantly confident performer. But surprisingly she seemed emotionally on the edge. With a quaver in her voice, she seemed about to burst into tears or laugh maniacally at any moment. And partly because of that I was completely caught up in her set. I couldn't take my eyes off her. Besides that, she created intriguing song structures. There wasn't a single verse-chorus-verse-chorus song.

The second opener, Alice Wallace, was also really good. She had a full band, and labeled her music "folky bluesy country." She played a song about Los Angeles called "Strange Town," which certainly everyone in the crowd could relate to. The most fun song of her set was "Tell Me Something," though "Baby I Do" was also very cool. She ended her set with a yodeling song.

The Mint has several tables, and if you want to be seated, you need to order food or at least two drinks. It's totally worth it - the drinks are not over-priced, and the staff was incredibly friendly. For those who don't want to eat, there are stools at the bar in the back. Of course, this band made me want to dance, and there really isn't a dance floor at this venue. There is also some really interesting artwork on the walls. (And there is a record store next door that is open until 2 a.m.)