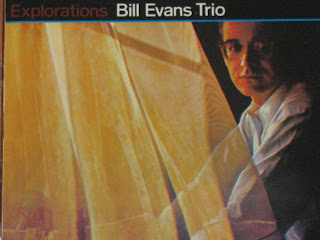 Bill Evans fans have plenty to be happy about these days. Quite a lot of his material is being re-issued, often with bonus tracks - some previously unreleased. The last year has seen the re-issue of Bill Evans Trio's Waltz For Debby (on September 28, 2010), the release of the two-disc set The Definitive Bill Evans On Riverside And Fantasy (on April 5, 2011), the re-issue of the Cannonball Adderley With Bill Evans album Know What I Mean? (on June 14, 2011), and Tony Bennett's The Best Of The Improv Recordings (which includes several duets with Bill Evans, released on July 12, 2011). All of that, in addition to Explorations, means a whole lot of great music.

This special re-issue of Explorations includes four bonus tracks, two of which were previously unreleased.

The CD opens with "Israel." Its first thirty seconds sound disjointed, but not jarringly so. And that intro helps draw the listener in, so he or she is ready when the song really kicks in. This song's most interesting section is the bass solo by Scott LaFaro. It's a soft, almost delicate, and intricate bass solo, played over just the steady closing of the high-hat and a bit of work on the cymbals. Bill Evans comes in for a moment on piano, but the bass solo isn't quite over, and Bill goes silent again. Soon after he comes in again, there is a brief but very unusual drum solo by Paul Motian. His solo is not about rolls or speed. It's about briefly exploring a strange rhythm with the entire kit.

Paul Motian has played with a wide variety of musicians over the years including Thelonious Monk, Arlo Guthrie and Bill Frisell.

"Israel" was written by John Carisi.

"Beautiful Love" is a peppy tune. At first it's the rhythm by Paul Motian that catches my attention. But then Bill Evans comes to the fore. At times, Bill Evans seems to be playing two complete piano parts at once. There is something loose, yet precise about his playing that is intriguing. "Beautiful Love" was written by Haven Gillespie, Wayne King, Egbert Van Alstyne and Victor Young. It was introduced in 1931 by the Wayne King Orchestra.

A different, longer take of this tune is included in the bonus tracks. At moments, this other version seems gloriously less structured, with more energy.

"Nardis" was written by Miles Davis. It appeared on Cannonball Adderly's 1958 release, Portrait Of Cannonball, an album that features Bill Evans on piano. Bill Evans of course played with Miles Davis for a short period in the late 1950s, appearing 1958 Miles (1958) and Kind Of Blue (1959). "Nardis" is a fairly mellow tune. It feature nice work on bass by Scott LaFaro, though his time in the lead position might go on a tad long.

"How Deep Is The Ocean?"

"How Deep Is The Ocean?" was written by Irving Berlin in 1932. It has been covered by many artists, including Billie Holiday, Ella Fitzgerald, Frank Sinatra and The Isley Brothers. Bill Evans' version has a good steady groove, with some wonderful work on piano.

A slightly longer take is included in the bonus tracks - one that was previously unreleased. Bill Evans' playing is more playful, fanciful at the beginning of this version, and I really like it. This version makes this re-issue worth owning.

"I Wish I Knew" was written by Harry Warren and Mack Gordon. The version here is a slow, thoughtful rendition. A different take is included in the bonus tracks.

The original album concluded with "Sweet And Lovely," written by Gus Arnheim, Harry Tobias, and Jules Lemare. Lots of folks have covered this song over the years, including Thelonious Monk, Sonny Stitt, Blue Mitchell and Buddy Powell. But this rendition by Bill Evans is particularly interesting. It definitely has the feel of a loose jam. And Paul Motian often stops, then springs back into action - while Bill Evans and Scott LaFaro just cut loose and play. And then Paul has another bizarre solo toward the end. This is one of my favorite tracks on this release.

The Bill Evans Trio is Bill Evans on piano, Scott LaFaro on bass, and Paul Motian on drums.

This special re-issue of Explorations was released on June 14th through Concord Music Group as part of the Original Jazz Classics Remasters series. Also released on that date were five other titles in that series: Cannonball Adderly with Bill Evans: Know What I Mean?, Chet Baker: In New York, Ornette Coleman: Something Else!!!!, Thelonious Monk: Thelonious Alone In San Francisco, and Ella Fitzgerald and Joe Pass: Easy Living.
Posted by Michael Doherty at 2:32 PM