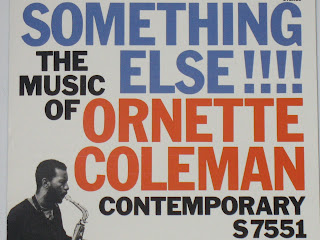 I was turned onto Ornette Coleman in 1988 when Jerry Garcia performed on one of his albums. I was a huge fan of the Grateful Dead, and of Garcia's guitar-playing. A Grateful Dead radio program played a cut from Ornette Coleman's album Virgin Beauty (the tune was "Singing In The Shower"), and after a moment it just clicked for me. Of course! It was one of those moments where everything made sense.

The Grateful Dead were all about jamming, about striving for those moments that approach some version of heaven. You get the feeling at times listening to this Ornette Coleman CD that what you're hearing is some perfect improvisation caught on a recording. It sounds like magic.

The tracks on Something Else!!!! were recorded in early 1958. This is Ornette Coleman's first album as a band leader, before he went completely off the charts and into some sort of outer jazz land. There are some traditional jazz rhythms here. But knowing what we do, it's easy to hear Ornette already bursting at the seams, ready to break through all boundaries, break through the songs themselves, to push them and himself into the Unknown. Free.

Those folks who don't care for his later work will still likely enjoy this album. So if you've been avoiding Ornette Coleman, give this one a go. It will probably also help give you more appreciation for what he did later.

Something Else!!!! opens with "Invisible," a tune that is loose, fun, playful, and just totally amazing. You can hear Ornette beginning to shake whatever shackles he perceived in the traditional forms. His saxophone is singing at times, to the point where you can understand just what it's saying. There is also some great work on drums by Billy Higgins - a nice solo.

To my ears, this track is the most set in the forms that preceded Ornette's work. That is, the main theme and structure feel traditional. But Ornette still does some incredible stuff, and works it - as if to say that any structure can be a jumping off point.

There are moments in "Jayne" where Ornette's horn is almost humming, like it's thinking aloud. There is great stuff on piano by Walter Norris, and I really love what Don Cherry does on trumpet on this one. "Jayne" was named for Ornette Coleman's wife.

"Chippie" is frantic right from the start, like his saxophone isn't satisfied and is pushing everyone else to get going, to get with it - giving a glimpse of the places it could go, the possibilities. And it screams, "Now! Now! Now!"

The rest of the band is totally up to the task. Granted, there are times when it sounds like Ornette is playing on a different level from them, but there are some amazing moments particularly on this track where everything comes together perfectly. Listen to Don Payne on bass - oo-wee.

Though "Alpha" has a clear structure, there are a few moments when Ornette is just about to push beyond it. Moments when he might leave all form behind. It's a cool tune, but also a bit frustrating because you want him to pursue those moments more fully.

The album concludes with "The Sphinx," which features some wonderful work by Walter Norris on piano. There are no bonus tracks on this re-issue. But that's all right. The music it contains is plenty. There is so much joy in Ornette's playing, and you can hear it throughout this album. All tracks were composed by Ornette Coleman.

The musicians on this release are Ornette Coleman on alto saxophone, Don Cherry on trumpet, Walter Norris on piano, Don Payne on bass and Billy Higgins on drums.

Something Else!!!! was released on June 14, 2011 through Concord Music Group, as part of its Original Jazz Classics Remasters Series. On that date, several other recordings in this series were released, including Chet Baker: In New York, Thelonious Monk: Thelonious Alone In San Francisco, Cannonball Adderly with Bill Evans: Know What I Mean?, Bill Evans Trio: Explorations, and Ella Fitzgerald and Joe Pass: Easy Living.