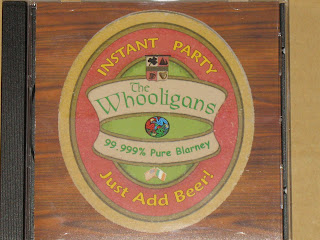 Every Day is St. Patrick's Day with The Whooligans. The Whooligans are a seriously fun band doing mostly traditional Irish songs. The band is based in Long Beach, California.

The Whooligans are a great band to see perform live in concert. They are so much fun, and they play nice long shows. This album manages to capture the energy and joy of this Irish band. The CD opens with a fun version of "Leaving Of Liverpool," a traditional song. It's a good version of the song too.

Anyone going out for St. Patrick's Day will certainly hear "Dirty Old Town," a song written by Ewan MacColl in 1949. And anyone who stays at the pub for more than one band will hear this song several times. This is one of those songs that everyone has covered. The version on this album has a great fiddle part. And the call and response section at the end is nice.

The third track is a live recording of "Wild Rover" from The Irish Mist, with an introduction of the band. Because this is a live version, listeners can hear the audience's clapping part. After the line, "And it's no, nay, never," there are four claps.

The other claps (two after "No, nay, never, no more" and one after "Will I play the wild rover") aren't there. That might be an east coast thing. Folks on the west coast can handle only so much, it seems.

"Black Velvet Band" is also a live recording from The Irish Mist. It's on the same track as "Wild Rover," though it's not a medley. There is a break between songs. Why this song isn't a separate track is anyone's guess. No matter. It's a wonderful version. Particularly fun is Ed Bell doing the voice of the judge.

"There Were Roses" is a sad song about two friends - one a Catholic, the other a Protestant. One is killed, and then there are thoughts and fears of revenge. Check out these great lyrics: "An eye for an eye, and that was all that filled their minds/And another eye for another eye until everyone is blind." "There Were Roses" was written by Thomas Sands.

"Jolly Beggerman/Carolan's Concerto" is an instrumental track. It's fun, especially as the tempo picks up near the end. It also features wonderful work on the fiddle. (And yes, that's how it is spell on the CD: "Beggerman," rather than "Beggarman.")

"I'm A Murphy's Man" is the only song on this album written by Ed Bell, and it's a fun little tune about a man who likes his Murphy's. Not that he will turn down a Guinness. Ed sings, "I'm a Murphy's Man/That's what I am/I drink it up each time I can/But if the Guinness brew is all you got/I'll drink that too, because rude I'm not."

This is an Irish album, so it ends with the obligatory "Danny Boy." Everyone's heard this song a million times, but there is a reason for that. It's a good song, and The Whooligans really do it justice on this recording.

The Whooligans Include Ed Bell From Married With Children

The band on this album is as follows: Ed Bell on vocals and bodhran; Matt Brislawn on fiddle and mandolin; Matt Clatterbuck on guitar and vocals; Dan Wilder on accordion, recorder and vocals; and Paul Toth on fretless bass and vocals.

Folks might recognize Ed Bell from his recurring role on Married With Children. He played the role of Bob Rooney. More recently Ed Bell (his stage name is E.E. Bell) was in episodes of Without A Trace, Bones and My Name Is Earl.

(Note: I originally posted this review on March 2, 2010 on another site.)
Posted by Michael Doherty at 9:14 PM