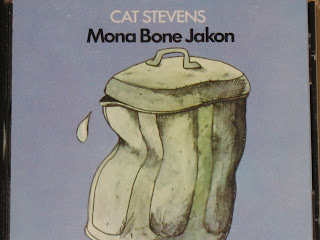 Mona Bone Jakon is one of Cat Stevens' best recordings, and one of the two albums from which songs were selected for the film Harold And Maude. (The other is "Tea For The Tillerman.")

This album was originally going to be titled, The Dustbin Cried The Day The Dustman Died - a title more fitting for the album cover's artwork. The artwork, by the way, was done by Cat Stevens. But apparently that title was too long to fit on the cover.

"Maybe You're Right" is a wonderful song about a relationship that's ended. As Cat Steven assures the other person, "It will never happen again." He sings, "So maybe you're right/And maybe you're wrong/But I ain't gonna argue with you no more/I've done it for too long." It's over, and there is nothing but regrets, but why talk about it anymore? But of course he's singing about it.

This is an amusing song, especially as Cat Stevens was, before venturing off into the land of folk, a pop star (or at least on his way to being a pop star). The song follows him as he makes his way through all the trappings of pop stardom, including going to the bank. And is he doing this all in order to impress his mother? The narrator is constantly trying to get his mother's attention, singing the song to her.

Though "Trouble" was not written specifically for Harold And Maude, it's difficult to listen to it without remembering those final scenes from the film. "Trouble" is one of the saddest songs ever. Cat Stevens sings, "Trouble/Oh trouble can't you see/You're eating my heart away/And there's nothing much left of me."

The album ends with the beautiful "Lilywhite."

Other Musicians On CD Include Peter Gabriel

(Note: I originally posted this review on February 27, 2010 on another site.)
Posted by Michael Doherty at 5:24 PM