The Deanna Varagona Trio: "The Goodbyes Have All Been Taken, Hello" CD Review 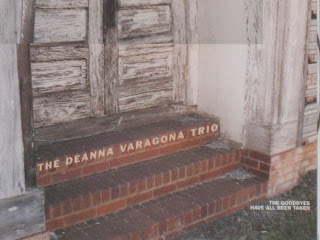 The Deanna Varagona Trio's 2003 release, The Goodbyes Have All Been Taken, Hello, is a wonderful and diverse collection of songs, all driven by Deanna's powerful voice, and featuring some excellent guest musicians.

Deanna Varagona has a gorgeous voice. At times it's reminiscent of Patty Griffin, with a bit of Nanci Griffith and Laura Love too. This album opens with "Faye Got Lost," a pretty folk song with little touches of mandolin. The chorus is "Is she calling out your name/Is she calling just the same/Is she close/Or is the wind/Just cryin' steady."

Though an original song, "Little Randall" has an old timey folk feel, on the heavier bluesy side. It's a seriously cool song with male vocals backing Deanna's voice. It's powerful and raw, a tough song that will clean the flesh off the bones.

"Gardener Man" begins acappella - serious and strong. Then when it kicks in, it's a country song, which is a surprise, particularly after the last track. "Gardener Man" is a fun, upbeat tune, a song to dance to. Deanna sings, "If I was a fallen angel/and you were a gardener man/you could sweep my dusty ashes/off this hard and barren land."

"I Better Stay Away"

"I Better Stay Away" is a slow, sad song featuring Deb Spoerl on cello and Robert Lloyd on mandolin. Robert is especially wonderful during the great instrumental section of this song.
"In Heat" is a folk tune with a nice rhythm provided by Jimmy Earley on drums. And the title refers to exactly what you think it does.

"Folding The Clothes" features Robert Lloyd on mandolin and Deb Spoerl on violin. This song has a nice blending of male backing vocals with Deanna's voice. It's a sweet, easy-feeling folk song.

"Dag Rag" is an old timey folk song, with the crackling sound effect of a record playing. It's amazing how often that effect is employed on CDs. Maybe these songs should just be released on vinyl. "Dag Rag" features Jeb Bishop on trombone.

Here is a bit of the lyrics: "Said I need a little time/Get back on my feet again/'Cause these clouds they fill my day time/And the rain it fills my head."

"My Better Years" is a wonderful song written by Hazel Dickens. It's the only cover song on this release. This song was originally included on Hazel Dickens and Alice Gerrard's 1973 album, Hazel & Alice.

The Deanna Varagona Trio does an excellent job on this song, with a great blending of vocals, punctuated by Jimmy Earley's hits on the snare drum.

"Starin' Out My Window"

"Starin' Out My Window" is a bluesy folk song written by Deanna Varagona and Joe Ferguson. Deanna belts out the vocals on this one, in perfect contrast to the quiet guitar. Robert Lloyd plays harmonica on this one.

Here is a bit of the lyrics: "Whiskey jar near empty/Feel my throat is goin' dry/Blues lurkin' in my doorstep, don't know if I'll make it by."

This CD concludes with "Choose Your Way," a song that has strong, raw power in the vocals and guitar. There is something fearless in Deanna's voice, in her delivery. The song begins, "Shake out the worry/What was that sound?/Thought I heard something/Before I fell to the ground."

The Goodbyes Have All Been Taken, Hello was released in 2003 on Gadfly Records.
Posted by Michael Doherty at 9:02 PM