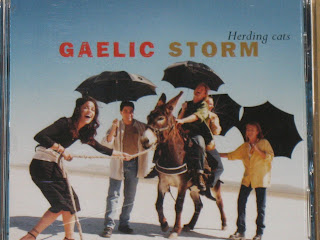 Gaelic Storm, famous for being the band that played the lower decks in the film Titanic, includes several instrumentals and original songs on this CD.

Before the film Titanic catapulted them to some higher level of fame and to larger venues, Gaelic Storm was the house band at O'Brien's in Santa Monica. Every week (every Sunday night, if memory serves), they would play, and they'd play for four or five hours. The cover was five dollars, and sometimes there was no cover at all. Those were great times.

"Drink The Night Away"

They open the album with "Drink The Night Away." What - an Irish band starting an album with a drinking song? Of course. And it's a good one too. This version isn't as lively as the song is when they perform it in concert, but it's a fun, cheerful song written by Steve Twigger and Steve Wehmeyer.

"The Ferryman" is another joyous tune. The chorus is: "Where the strawberry beds sweep down to the Liffey/you'll kiss away the troubles from my brow/I love you well today, and I'll love you more tomorrow/If you ever loved me, Molly, love me now." Is there a sweeter name than Molly? Pete St. John wrote this song.

When "South Australia" kicks in, people will be dancing. However, this is another song that had more power in concert performances.

"After Hours At McGann's" is actually an instrumental medley made up of "The Primrose Lass," "Hewlett's Reel" and "Reel Gan Anim." As with most Irish reels, the fiddle dominates. Listening to this song will make people want to learn the Irish step dances.

"Heart Of The Ocean" Was Inspired By Titanic

"Breakfast At Lady A.'s" kicks the album back into gear. This is another instrumental medley, this time of "Coleman's Jig," "Sean Ryan's Jig #2" and "The Lark In The Morning."

The album ends with another medley called "Titanic Set." Yes, yes. The song is made up of "O'Mahoney's" and "Murphy's Reel."

At O'Brien's this band got the whole audience dancing and singing along - which can be something of a feat in Los Angeles with its sometimes jaded, inhibited crowds. Nights with this band were always incredible. They used to hold drinking contests during "Seven Drunken Nights" - audience members against band members - during every verse. That song would sometimes last twenty minutes.

CD Doesn't Quite Have The Energy Of Their Live Performances

Somehow they weren't quite able to capture the energy of their live shows on this studio release. The CD lacks that raw power and intimacy of their live performances. There is some distance there, particularly on the vocals. The instrumentals fare better - having more energy and life. But the songs are good, the songs are strong.

The band (as of this recording) is as follows: Patrick Murphy on vocals, harmonica, accordion and spoons; Shep Lonsdale on djembe, doumbeks, percussion; Samantha Hunt on fiddle; Steve Twigger on guitar, mandolin and vocals; and Steve Wehmeyer on bodhran, vocals and didjeridoo.