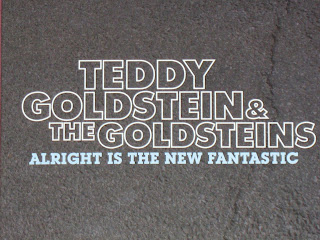 Teddy Goldstein's 2010 release is full of beautiful, bittersweet songs of longing and love, despair and optimism. His voice so clearly conveys these mixed emotions that the lyrics are almost unneeded. But the lyrics are really good.

The album opens with "Fully," a beautiful and sad song. This song creates a mood so perfectly. The vocals are excellent, as are the lyrics. He sings, "And I lost my mind when I was a child/And it never came back fully." Wonderful. And this: "So now you're heading back home/You've got a life of your own/And enough things to do to forget me/And I'm going to be fine/It's just a matter of time."

This song has a bit more of a rock edge to it. The electric rather than the acoustic guitar drives this one. Teddy sings, "There comes a time you realize how much you have lost by now/playing the game." The refrain is "That's when you change, change, change." The song hints that the change is for the better, but what exactly the change is, well, that's not spelled out, which is great.

"Not The Real Thing"

"Not The Real Thing" is another simple and wonderful song, with a nice little instrumental section in the middle. The song starts with Teddy saying, "Congratulations," but then the repeated line is, "This is not the real thing." The song has some great lyrics, like, "Everybody's been trying to tell you/Friends and family/But it never got through/You were working on something else then/Like being young and independent."

"Comeback" is a song from the perspective of someone who is lonely and distraught, but still optimistic about his ability to rise above it and to improve his lot. This song has contemporary R&B overtones and rhythms.

"Livin' Like We Care" opens with the line, "Well I know I'm my father's son/I've got a mountain to climb." What an excellent opening line. The chorus is also wonderful: "It's a long way up/If you want to reach the sky/But it's a long way down/So you might as well try/Nobody ever said it would be fair/Still we've got to keep on livin' like we care."

"New York City" has that certain New York sense of humor about itself. Actually, it's slightly reminiscent of John Gorka's "I'm From New Jersey" in its tone and attitude, with that bittersweet look at one's home town. Here is a taste of the lyrics: "Everyone has gone insane/It's too damn bright to see the stars/And you can't afford to keep your car/You may as well just kill yourself/Because New York City is a living hell." And yes, it's a love song to the city. After all, New York is his home now.

The song's feel is mellow, which is in wonderful contrast to its somewhat silly lyrics. This is a really good song. Bennett Paster's keyboard sounds just exactly right.

"Union Street" is a look back at the early days of a relationship when the narrator lived on Union Street, and he wasn't sure which buzzer outside the building was his. Right from the beginning, the listener knows they're still together and living in Ohio, so there's no fear of this song turning sad (except perhaps for the fact that they're living in Ohio). How refreshing to hear about the beginning of a love that still exists. But of course, they've only been together for a year, so...

The album concludes with "Narcissistic." It opens with the line, "I have never won a thing in my life, but I still got faith." The chorus is, "Everyone I know is good down to their soul/What does that say about me/And my narcissistic personality." This song features some nice keyboard work by Bennett Paster, and some nice electric guitar fills by Steve Walsh.

All the songs were written by Teddy Goldstein.