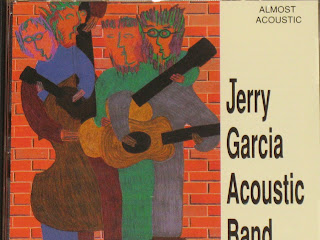 This is a live album, recorded in the fall of 1987. Obviously it's an acoustic record, which is interesting, because this was recorded at what was really the height of the Grateful Dead's fame. They had their first genuine hit, "Touch Of Grey" earlier that year.

A lot of the songs on this album are traditional songs. Of course, what that really means is that either no one knows who wrote the songs, or that people don't care to find out. But Jerry had always been interested in folk music. He had a bluegrass band in the 1970s called Old & In The Way.

The album starts with "Swing Low, Sweet Chariot." The first known recording of this song is from 1909, by the Fisk Jubilee Singers.

The second song is "Deep Elem Blues," another traditional song, but one that the Grateful Dead had done years earlier. This version is excellent.

The crowd is clearly ecstatic just to be there, to be witnessing this show. The musicians seem to be sharing their ecstasy, putting in some of their best performances.

On Jimmie Rodgers' "Blue Yodel #9" Jerry even does a bit of yodeling. He does a pretty good job too.

"Oh, The Wind And Rain" is also known as "Dreadful Wind And Rain" and "Wind And Rain." It is also similar to "Two Sisters," telling the same story about two sisters who love the same boy. And so one of the girls pushes the other into the river to drown her.

This song has been covered by many artists over the years.

Jerry introduces "Oh, Babe, It Ain't No Lie" by saying, "I'd like to dedicate this song to the memory of Elizabeth Cotten." Elizabeth Cotten, who had written this song, died earlier in 1987. Elizabeth Cotten was self-taught on the guitar, and started writing songs when just a child - including "Freight Train," which was also covered by Jerry Garcia.

The album ends with its only original Garcia/Hunter composition, the beautiful "Ripple." Originally released on the Grateful Dead record American Beauty (one of the best albums ever recorded) in 1970, this song also concluded the Grateful Dead's live acoustic record Reckoning (which was also released under the title For The Faithful).

Grateful Dead Fans And Anyone Who Appreciates Good Folk Music

One does not have to be a fan of the Grateful Dead to appreciate this album. In fact, only a few of the songs on this album were ever performed by the Dead, including "Deep Elem Blues," "I've Been All Around This World," "Oh, Babe, It Ain't No Lie" and of course "Ripple."

Most of the songs on this album are covers. But Jerry, when away from the Grateful Dead, always chose more cover songs than his own original compositions - even when the Jerry Garcia Band performed their more regular electric sets. In the electric shows, the material was more often by Bob Dylan or selections from Motown, rather than the folk songs on this album.

Jerry Garcia's band on this recording is Jerry Garcia on vocals and guitar; David Nelson on guitar and vocals; Sandy Rothman on mandolin, dobro and vocals; John Kahn on acoustic bass; Kenny Kosek on fiddle; and David Kempter on snare drum.

(Note: I originally posted this review on February 25, 2010 on another site.)
Posted by Michael Doherty at 5:46 PM