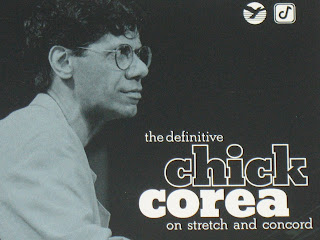 There is really no one else in the music world quite like Chick Corea. And listening to this wonderful collection of his work gives you a clear picture of his range, his intelligence, his innovations.

Chick Corea first got attention playing with Miles Davis in the late 1960s, and can be heard on such albums as In A Silent Way and Bitches Brew. But he very quickly became a band leader. He released albums on Blue Note, ECM and Polydor in the 1970s.

The Definitive Chick Corea On Stretch And Concord focuses on his output from 1980 to the present. This collection features mostly original material, but also some interesting covers. There is one previously unreleased track.

There are quite a number of live tracks in this collection, which is wonderful because sometimes poeple think of the precision of studio recordings with relation to his material and gloss over the passion in his playing. The live tracks really show what he can accomplish - combining a stellar technique with unbridled enthusiasm.

He also surrounds himself with some of the most talented and spirited musicians on the planet, including Joe Henderson, Dave Weckl, Bela Fleck, who are featured in this collection.

The first disc opens with "Tap Step," a fun, odd little number with a good groove. Jazz meets electronica in this 1980 tune, and then it goes into a wild jamming section. Some of the current electronic jam bands seem to have taken part (or all) of their inspiration from this very tune.

"Quartet No. 1" is such a great track. It begins with a strange, slow rhythm by Steve Gadd on drums - a groove that quickly becomes wilder as the track goes on - and some insane playing by Michael Brecker on saxophone. Beautiful chaos. And then there's a break, and suddenly we're into this pretty piano interlude. It's over that that Eddie Gomez has his best moments on bass. "Quartet No. 1" is from Chick Corea's 1981 release Three Quartets.

"Folk Song" is the collection's first live track. It's from 1981's Live In Montreux, and it features great work by Joe Henderson on saxophone and Roy Haynes on drums.

"Duende" is a pretty and moving song that feels like the score for a really good dramatic film - something with an air of mystery.

The CD then suddenly jumps from 1982 to 1997 (Though Chick Corea did release a significant number of recordings during the intervening years, those records were on other labels.) Tracks 5, 6, 7 are from three different albums all released in 1997.

"Armando's Rhumba" is one of Chick Corea's most famous songs, and with good reason. This version is a wonderful duet - Chick on piano, Gary Burton on vibraphone. No other musicians appear on this track. This song was named after Chick's father. It has a great spirit, but also a genuine warmth.

The first disc includes a live solo version of "Spain," another of Chick Corea's most famous compositions. This is all Chick here - just him on piano. And so Chick pours his heart into it, and the results are wonderful.

"It Could Happen To You"

The only cover on the first disc is "It Could Happen To You," written by Jimmy Van Heusen and Johnny Burke. This version is from Chick Corea's 1999 release Solo Piano: Standards - Part 2. Chick Corea does some really interesting things with this song, making this probably the most intriguing version I've ever heard, particularly in terms of pace and rhythm. He gives the song new voice.

Miles Davis included a version of this song on his Relaxin' With The Miles Davis Quintet.

The first disc ends with "Fingerprints," an incredible song that moves and pulses with great energy and vivacity. There is amazing work on bass by Avishai Cohen. some very impressive stuff by Jeff Ballard on drums too. It's astounding that there are only three musicians on this track. This is one of my favorite tracks.

Most of the second disc is live material. The opening track is a live version of Thelonious Monk's "Blue Monk." An odd duet, this version is Chick Chorea on piano and Bobby McFerrin on vocals, McFerrin doing some ridiculous scat-type stuff. Partway through he says, "This is important. This is important stuff," getting a laugh from the audience.

This was recorded at Chick Corea's 60th birthday celebration in 2001 and was included on Rendezvous In New York (2003).

(As a side note, a version of "Blue Monk" can be heard on Thelonious Monk's Thelonious Alone In San Francisco, which was re-issued on June 14, 2011.)

From that same recording comes a great cover of John Coltrane's "Bessie's Blues." This track features the incomparable Dave Weckl on drums. (He's been one of my favorite drummers since I saw him at the 1987 Modern Drummer Festival.)

Weckl also plays drums on "Johnny's Landing" (from 2004's To The Stars) - a very different type of song with a seriously fantastic groove.

"Fool On The Hill"

Chick Corea does an interesting take on the Beatles song "Fool On The Hill." This is a live track, a piano duet with Chick Corea and Hiromi. It's not until a minute in that the song begins to sound familiar. But that first minute is amazing, and they return to that section later.

"The Fool On The Hill" was originally included on The Beatles' Magical Mystery Tour (1967). Chick Corea's version is from his 2009 release, Duet.

"Senorita" features Bela Fleck on banjo. Who would think to pair Chick Corea with Bela Fleck? But it totally works. This is one of the CD's best tracks. It's from Chick Corea's 2007 release, The Enchantment.

This collection concludes with a previously unreleased track - an excellent live version of "La Fiesta." This was recorded during Chick Corea's 2009/2010 tour, and features Stanley Clarke on bass and Lenny White on drums.

The Definitive Chick Corea On Stetch And Concord was released on June 7, 2011 through Concord Music Group.
Posted by Michael Doherty at 2:01 PM