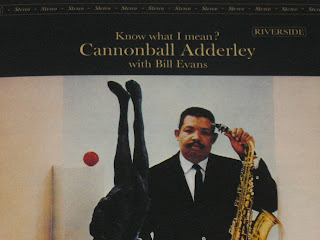 I admit that before popping this disc into my player I knew nothing about Julian "Cannonball" Adderley. But I was immediately drawn in and won over. Of course, I had Bill Evans as an access point. Besides playing on this album, it's one of his compositions that begins this release.

The album opens with a Bill Evans composition, "Waltz For Debby." This is one of my favorite Bill Evans tunes, and the version here is wonderful. It begins with just Bill Evans on piano - playing delicately, beautifully. It's more than a minute in before the rest of the band comes in, and Cannonball Adderley takes his lead on alto saxophone. And to match Bill's playing, Cannonball's sax is played with beauty and precision. But as the song goes on, Cannonball loosens up, starts blowing harder. It's interesting that after Bill's solo late in the song, when Cannonball comes back in, it's with a softer edge again.

"Goodbye" is a mellow tune, and it's Cannonball's song right from the start, with some wonderful, sustained notes. Bill plays softly, perfectly behind him, and when it's his turn at lead, he doesn't really change what he's doing at first. It's more like Cannonball got interested in what Bill was already doing and stopped playing so he could listen to him. I love Bill Evans' work on this song. It's actually quite a while before Cannonball comes back in.

"Goodbye" was written by Gordon Jenkins. Bill Evans included a version of this song on his 1962 release, Empathy.

"Who Cares?" was written by George Gershwin and Ira Gershwin for the 1931 musical Of Thee I Sing. There is a certain swing to the rhythm created by Percy Heath on bass and Connie Kay on drums. Cannonball takes the lead early, and his playing is so wonderful you don't want him to relinquish the lead, but to just go on and on. He is really singing with that sax.

A different take is included in the bonus tracks.

"Venice" starts off as a sly little number with Percy Heath setting the pace and tone on bass, with some work on cymbals by Connie Kay. Then Cannonball comes in, easing into the structure Percy created. It's not until Bill Evans comes in that the song takes on a bit of a brighter or lighter tone. But it doesn't change all that much. This is a totally cool tune.

"Venice" was written by John Lewis.

"Toy" comes on stronger from the start. This song has a catchy hook on saxophone, and interesting changes throughout. It also has a great quick rhythm. I love what Connie Kay does on this track. "Toy" is definitely one of the album's highlights. It was written by Clifford Jordan.

An alternate take of "Toy" is included in the bonus tracks - a take that was previously unreleased.

"Elsa" begins with Bill Evans. The bass and drums create a soft, pretty, easy rhythm. And Bill's playing is sweet. It isn't until nearly two minutes in that Cannonball comes in. He raises the energy level a bit, but it's mostly keeping within the perceived boundaries set by the rest of the band.

Interestingly, earlier that same month that this track was recorded, the Bill Evans Trio recorded this tune for inclusion on Explorations. Bill Evans would later record it again for Trio '65. "Elsa" was written by Earl Zindars.

"Nancy (With The Laughing Face)"

"Nancy (With The Laughing Face)" was written by Jimmy Van Heusen and Phil Silvers, and was famously recorded by Frank Sinatra. (It was also recorded by Tony Bennett and Ray Charles.) I love the delicate playing of Bill Evans on this album's version. And Cannonball's playing has an almost romantic feel, which then changes Bill's playing at the end. And listen to the bass.

As it began, this album concludes with a Bill Evans composition. This one being the title track, "Know What I Mean?" Whereas Bill introduced "Waltz For Debby," Cannonball comes in fairly soon on this tune. It's a mellow tune, until the cool bass solo a minute and thirty-seven seconds in. Then the drums come in with more volume, and change the song. Bill's playing on this one is looser at times, before the song returns to its mellower theme.

An alternate take is included in the bonus tracks. This version is longer, with a significantly different beginning - particularly with what Connie Kay is doing on drums.

The musicians on this album are Julian "Cannonball" Adderley on alto saxophone, Bill Evans on piano, Percy Heath on bass, and Connie Kay on drums.

This special re-issue of Know What I Mean? was released on June 14, 2011 through Concord Music Group as part of the Original Jazz Classics Remasters series. Also released on that date were five other titles in that series: Bill Evans Trio: Explorations, Chet Baker: In New York, Ornette Coleman: Something Else!!!!, Thelonious Monk: Thelonious Alone In San Francisco, and Ella Fitzgerald and Joe Pass: Easy Living.

The new liner notes included with this release have little to do with Cannonball Adderly and Bill Evans, and are more about a jazz magazine and an attempt to interview Thelonious Monk. But the original liner notes are also included.

Julian Cannonball Adderley died in August of 1975.
Posted by Michael Doherty at 2:23 PM