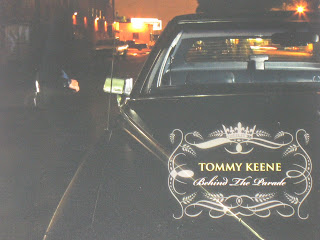 Tommy Keene's new CD, Behind The Parade, is an album that demands some volume from your stereo. It isn't an album that works well at low volume. It loses something, loses some of its power. This is due to these songs being driven by guitars. On most of these pop rock tracks, the guitars really fill the space. But this album features some good lyrics as well, so don't let the guitars keep you from paying attention to the words. Tommy Keene wrote all of these songs, in addition to performing the vocals and playing the guitars and keyboards. He recorded these tracks at his home.

The album opens with "Deep Six Saturday," which bursts in with a bright-sounding bit of guitar before the rest of the instruments kick in. Something in Tommy Keene's voice might remind you of Tom Petty or possibly Elvis Costello. There is also a bit of 1960s pop feel to this tune. Then the horns come in as a welcome surprise. This is one of the CD's best tracks. Here is a taste of the lyrics: "Our fortified world is tumbling down/Ready for the night to turn around."

"Already Made Up Your Mind"

I really want to hear a stripped down acoustic version of "Already Made Up Your Mind." A stripped down version would give the vocals more strength, more emotional poignancy. And a raw edge that would serve the lyrics better, especially on lines like "Don't say please when you're down upon your knees/And don't you lie when you've already made up your mind."

"Behind The Parade," the album's title track, has more of an edge. If you don't pay close attention, it might sound like a straight-ahead pop rock tune. But there is more going on here, and there are some interesting changes. Tommy sings, "Everybody has a breaking heart/Everybody, everywhere you go/I was wondering where I fit in/If I ask, would you tell me so." There is great energy in the instrumental section toward the end. This is definitely one of the stronger tracks on this CD. It's one that I appreciated more the more I listened to it.

"Nowhere Drag" begins with the guitar fading in, and it actually sounds pretty. Then the steady drum beat announces that this is rock, but it doesn't explode in like you might expect it to. This song features some good lyrics, like "Thank God for match and cigarette/With the only face that I could get."

"La Castana" is completely different from the preceding tracks (and from everything that is to follow). It's a slow, moody electronic instrumental track. At times it sounds like sunlight bursting from water to shine on an amazed people. It's an interesting track, especially considering how out of its element it seems, but it does run on a bit longer than necessary.

"Running For Your Life"

In "Running For Your Life," guitars lead into a solid steady rock rhythm. And then the song stays true to that rhythm, not varying much. I love the line, "Where will you go when the high is gone, but still the night keeps going on?"

"His Mother's Son" begins with a rain sound effect, which I never appreciate. The song also ends with the sounds of rain and wind. But in between, there is some good stuff, particularly the instrumental section, which has a lot of heart.

"Lies In My Heart"

The album concludes with "Lies In My Heart," a fun tune mixing elements of early 1980s rock with 1960s pop sensibilities. It's a perfect summer rock tune, one I'd like to see him perform in concert, especially at an outdoor venue. Here is a bit of the lyrics: "A fortunate one who walks alone in dreams today/When people are talking all they hear is what they say."

The song ends with the repeated line, "will fade away," and true to his word, the song fades away.

Musicians appearing on this album are Tommy Keene on lead vocals, guitars, bass and keyboards; Brad Quinn on bass and harmony vocals; Rob Brill on drums; and Chris Bautista on horns.

Behind The Parade is scheduled to be released August 30, 2011 through Second Motion Records.
Posted by Michael Doherty at 6:34 PM