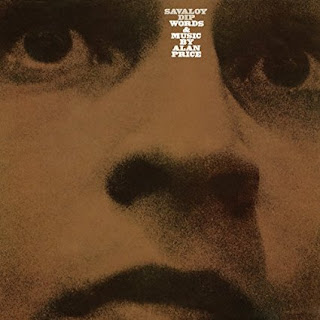 Alan Price is known for being a founding member of The Animals, and he left that group after a few years to pursue his own musical ventures. He provided the music for the 1973 film O Lucky Man! (if you haven’t seen that movie, I highly recommend checking it out). He also appears in that film. And following it, he recorded Savaloy Dip, which was scheduled to come out in 1974. The album was mysteriously shelved, though for some reason some copies were released on 8-track. Go figure. The album has now finally gotten an official release, thanks to Omnivore Recordings, and the liner notes by Gene Sculatti provide a little information on the story of this album (the liner notes include a photo of the 8-track), but it largely remains a mystery why this album didn’t get a proper release back in the day. One of the songs, “Between Today And Yesterday,” would end up on Alan Price’s next release, and actually would be that record’s title track.  But this entire album is excellent, and most of the tracks are originals, written by Alan Price. Some interesting characters populate these songs (listen to “Willie The Queen,” “Poor Jimmy” and “Over And Over Again” for examples). This album is whole lot of fun. By the way, there is a cute note about the album’s title on the back of the CD case.

The album opens with a fantastically fun, energetic tune titled “Smells Like Lemon, Tastes Like Wine.” Drums kick off this tune, which has a great rhythm. Alan Price’s vocals themselves have a great rhythmic quality. And there is a humor to the vocal approach as well. “Before I knew it, she was out the door and she was out of town/She put me down/Making me frown/Just look around/I’m down.” This song is a joy, and there is a very cool instrumental section led by guitar. I can’t imagine what the reasoning was behind the decision to not release this album. Insane.

The following track, “Willie The Queen,” reminds me a bit of Randy Newman, but also has something of a New Orleans vibe. It’s a delightful and kind of sweet song about a popular crossdresser. “When Willie has a party, all the boys turn out/’Cause he loves them so.” And I love that organ section. “You Won’t Get Me” also has an excellent instrumental section, with Alan Price delivering some wonderful stuff on piano, nice and loose. Cool work on bass too. And I love that the instrumental section is allowed to go on longer than you might expect.

“Savaloy Dip,” the CD’s title track, is a fun rock and roll song, with some nice work on horns. “Mention me to my friends up north when you visit/Tell them I think of them each lonely minute.” And toward the end he repeats, “Won’t you tell them to keep my chair warm, I’ll be home.” “Country Life” is a kind of quirky and cute number about leaving the city and heading out to the country, driven by some wonderful vocal work. “Oh, won’t you let the pixies through your door and over your window sills/Country life will make a man feel twice the man you are.” Again, why was this record not released in 1974? It’s so damn good.