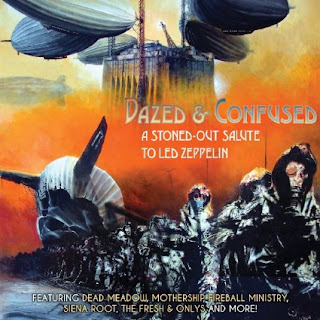 Last year saw first the release of Stoned: A Psych Tribute To The Rolling Stones, a compilation of covers with the focus being on the psychedelic aspects of the Rolling Stones’ material, and then the release of The Magical Mystery Psych Out: A Tribute To The Beatles, which likewise focused on the psychedelic elements of that band’s music, and is perhaps even better than the Rolling Stones tribute album. Now Cleopatra Records is following those up with Dazed & Confused: A Stoned-Out Salute To Led Zeppelin. This CD isn’t quite as good as the other two, in part because Led Zeppelin wasn’t as good a band, and also because this one has a heavier, harder feel on several tracks, rather than highlighting the psychedelic qualities, as the earlier two CDs did. But still, there are some really good tracks on this compilation, like Mothership’s rendition of “Heartbreaker” and Electric Eye’s take on “Immigrant Song” and The Tulips’ version of “Stairway To Heaven.”

It opens with Siena Root’s version of “Whole Lotta Love.” This version doesn’t quite work for me. The vocals have more of a heavy metal feel, and this isn’t really that interesting a song anyway. It’s actually a rip-off of Muddy Waters’ recording of Willie Dixon’s “You Need Love.” As you might be aware, Led Zeppelin ripped off a lot of artists, claiming writing credits for songs they basically stole. More on this in a moment. “Whole Lotta Love” is followed by Fireball Ministry’s rendition of “The Rover.” “The Rover” is a rather dull song from the Physical Graffiti album, and this version is a typical hard rock version.

The first really interesting and original interpretation of a song on this CD is The Cult Of Dom Keller’s rendition of “Dazed And Confused.” They really delve into this song, creating an interesting heavy and electronic landscape. Of course, this is another song that Led Zeppelin stole. It was written by Jake Holmes, not Jimmy Page. Jake Holmes released his version in 1967, two years before Led Zeppelin recorded it. (That original Jake Holmes version is excellent, by the way.)

I got into Led Zeppelin when I was eight or nine years old, and “Heartbreaker” was one of my early favorites. On this CD, hard rock band Mothership does a really good job with it, though without exploring any new avenues. (By the way, there is a greatest hits compilation of Led Zeppelin songs titled Mothership.) “No Quarter” is a more interesting song, and Dead Meadow seems quite at home in this more psychedelic realm.

Another of the compilation’s more interesting takes is Electric Eye’s rendition of “Immigration Song,” one of Led Zeppelin’s coolest tunes (originally on III). That great rhythm is slowed down just a bit, and some trippy elements play over it as the song opens. It’s such a great version, exploring new territory while still remaining true to the core of the song. This is one of my favorite tracks on this compilation. Electric Eye is a band I didn’t know before, hailing from Norway, but this track has gotten me excited enough to look further into their music.

When I first started playing drums in my early teens, “The Ocean” was one of my favorite songs to play. You just couldn’t get away from playing Led Zeppelin in those days, but I never minded when this song was chosen. It’s from Houses Of The Holy, which I still think is the band’s best album, and this song still really works for me. I definitely dig Brutus’ rendition. This is another band I didn’t know, and another band from Norway.

“Nobody’s Fault But Mine” is another song of dubious authorship. Blind Willie Johnson’s version came out decades earlier, and there are definitely some similarities between the two, but Led Zeppelin’s version goes in quite a different direction. Still, the Led Zeppelin song would not exist without the Blind Willie Johnson song. On this compilation, The Machine, a band out of The Netherlands, does a good job with it. “Stairway To Heaven” is another song that got Led Zeppelin into trouble. They stole that guitar intro from an instrumental tune called “Taurus” by Spirit (a band that Led Zeppelin actually opened for). There is no question about it. Just listen to “Taurus.” Here “Stairway To Heaven” is covered by The Tulips, and I love what they do with it, giving it a cool, psychedelic vibe. This is another of the compilation’s highlights.

In Fast Times At Ridgemont High, one character advises another, “When it comes down to making out, whenever possible, put on side one of Led Zeppelin IV.” And then it cuts to this kid on his date, and we hear “Kashmir,” which of course is not from Led Zeppelin IV, but Physical Graffiti. I wonder about that time every time I watch that movie. Anyway, “Kashmir” is another of Led Zeppelin’s coolest songs, and Indian Jewelry does a strange and original rendition.

CD Track List
Dazed & Confused: A Stoned-Out Salute To Led Zeppelin is scheduled to be released on February 5, 2016 on Cleopatra Records.
Posted by Michael Doherty at 2:28 PM