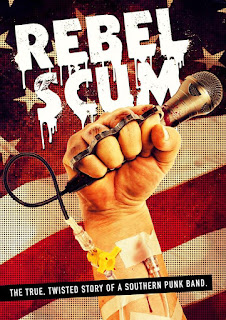 Rebel Scum is a documentary film about southern punk rock band The Dirty Works, and specifically about its lead singer, Christopher Scum. It’s about music, expression, addiction, abuse and living in the so-called Bible Belt. Before the film even begins, a title card tells us of a tragedy – after the film was completed, Christopher Scum and his girlfriend Rene were in a car accident, which killed Rene and left Christopher severely burned. It’s interesting that the filmmaker chose to include this at the beginning rather than at the end, because of course it colors our perception and reception of everything in the film, at least to a degree.

Before we are introduced to Christopher Scum, Rene tells us, “Nobody knows what he’s like when he drinks.” And moments later we see him, wasted and wielding a knife. He says he might burn the city down, and then lights his own hair on fire. This guy is a fucking mess, clearly; but he is also intriguing.

The film then goes back two years to when the filmmaker first started documenting the band. Interestingly, the director tells us that initially he was filming another band, Dropsonic, when he saw The Dirty Works on the same bill, and members of Dropsonic told him that that was the band he should be documenting. And the film shows us footage of both bands at that small venue in Atlanta.

Though Christopher Scum is at the center of the film, this documentary features plenty of footage of the other band members, who seem fairly candid and unabashed. Guitarist Steven Crime say that he wanted to be like Jimmy Page. “I started to party like a rock star later on when I was in high school and stuff, without actually being a rock star.” Rene is also fairly candid, saying when she met Christopher they were both alcoholics. “When we met, it was like a train wreck,” she says. And there is material on Christopher’s childhood, when he suffered beatings at the hands of his stepfather (who, by the way, is interviewed in the film). That seems to have informed a lot of his outlook and personality, understandably, and Christopher seems fairly aware of its effect.

But it isn’t just Christopher who has problems. Steven Crime has a serious drinking problem, and we see the effects of this throughout the documentary. This film doesn’t shy away from any of the negative experiences, including fights. Sure, sometimes their troubles feel tedious, and you just want to throttle these guys and tell them to get it together or fuck off. But it feels like they’re telling each other just that, and yet still having trouble making it work. There are moments that are funny, moments that are depressing, but overall it is something of a nightmare, a place from which these people just can’t seem to escape.

And of course there is plenty of music, with the band’s themes centering on living in the Bible Belt, with lines like “Everything we do is a sin” (a line I especially love). There is quite a bit of footage of the area, particularly of those crazy church signs. And there is concert footage. Christopher has a set of brass knuckles attached to his microphone, which as one band member says, he only uses on himself. Christopher tells us that it’s a release, that he uses it to relieve the angst he feels daily. For me, some of the most interesting footage is from when they are recording Biscuits And Liquor, having paid for a twelve-hour slot to record all their material, and absolutely having to finish the entire album in that time, enough to stress anyone out.

This DVD includes the music video for “Bible Belt.” It also has footage from the Atlanta premiere of the movie (which was quite a while ago – May 8, 2010), with interviews with band members and the filmmakers. Interestingly, Steven’s drinking problem comes into play even in this footage. There is also footage from the Knoxville premiere, with Christopher Scum performing “Drinkin’ Beer With Jesus” afterward. Rene was still alive for these premieres, by the way. The NPR coverage before the Atlanta premiere is also included, and there is a behind-the-scenes photo gallery and the film’s trailer.

Rebel Scum was directed by Video Rahim, and was released on DVD on November 24, 2015 through Wild Eye Releasing.

One other note: The film’s title can’t help but remind me of that moment from Return Of The Jedi when the imperial forces surround our heroes on Endor, and one officer says, “You rebel scum!”
Posted by Michael Doherty at 2:59 PM