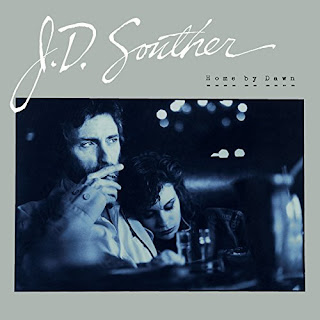 J.D. Souther may be known primarily for his songwriting talents (he co-wrote some of The Eagles’ biggest hits), but these days people are getting another chance to hear some of his excellent recordings. His first solo album was released as an expanded edition by Omnivore Recordings, and soon both his second album, Black Rose, and his fourth album, Home By Dawn, will likewise get expanded editions. (Of course, that makes me wonder why his third, You’re Only Lonely, is being skipped.) Home By Dawn has quite a different feel from the others, having a more pop-oriented country vibe, along with elements of rockabilly. As with earlier albums, this one boasts some wonderful guests, including Linda Ronstadt and Don Henley, and features all original material, written or co-written by J.D. Souther (one of the bonus tracks, however, is a cover). This expanded edition contains four bonus tracks, three of which were previously unreleased, and new liner notes by Scott Schinder with excerpts from a recent interview with J.D. Souther.

The album kicks off with its title track, “Home By Dawn,” a lively tune with a much more modern country pop feel than earlier material, while somehow simultaneously having something of an early rock or rockabilly element, all wrapped up in 1980s production sounds. As different as the sound is, at the heart of it is still J.D. Souther’s impressive songwriting. “He said goodbye and just walked right out the door/He looked so good he must have practiced it before.” Don Henley provides some backing vocals on this track (he also sings on “Bad News Travels Fast”). That’s followed by “Go Ahead And Rain,” which has kind of a sweeter pop feel. It opens with these lines: “I don’t know how you go on with your sorrows/Weighing you down like a stone/But then, I don’t know how I can sit here/And give you advice, dying for home.” He’s such a good songwriter.

“Say You Will” has a bit of a Buddy Holly vibe, and features Linda Ronstadt on vocals. Linda and J.D. had worked together before, and actually she sang on “If You Have Crying Eyes” on Black Rose. She had also covered several of his songs on her own albums, including “Faithless Love,” “I Can Almost See It,” “Don’t Cry Now,” “The Fast One” and “Silver Blue.” As always, J.D. and Linda sound excellent together on “Say You Will,” a song that J.D. Souther wrote with Danny Kortchmar. “You can stay until/Either one of us gives up/And then all right/Kiss me good night/But say you won’t let me go.” This is one of the album’s best tracks.

“I’ll Take Care Of You” is a sweet, fairly straight, unabashed love song, which came as kind of a surprise after listening to his earlier albums. This track features J.D. Souther on vocals and piano, with Billy Walker on guitar. This song was covered by The Dixie Chicks on their 1998 release, Wide Open Spaces. The bonus tracks include a demo version of this song. “I’ll Take Care Of You” is followed by another love song, “All For You,” with lines like “But this is just one night/And I know life is too long/To go on living without you.” I also really like these lines: “You know I’d do anything you want me to/The darkest night is just the kind I like/But I just can’t sleep it through.”

“Night” is a really good and catchy pop song, which J.D. Souther co-wrote with Waddy Watchtel, who plays guitar on this track. “Light, too much light/Means one more night/Is all over/But the night keeps coming back/Nothing could be as good as that.” How was this song not a hit? It’s one of my personal favorites. The original album concludes with “All I Want,” a track on which J.D. Souther plays all the instruments.

The bonus tracks include “Hearts Against The Wind,” an absolutely wonderful song from the 1980 film Urban Cowboy. It’s a duet with Linda Ronstadt, and features Ricky Skaggs on mandolin. This is the one bonus track that was previously released. “Little Girl Blue” is the one cover tune on this CD. It was written by Lorenz Hart and Richard Rodgers, and was also covered by Janis Joplin and Nina Simone, among many others. This is such a pretty song, and J.D. Souther goes a great job with it. The CD then ends with “Girls All Over The World,” a very cool, humorous, bluesy tune. This is actually one of my favorite tracks. Here is a taste of the lyrics: “You see 'em on the beaches/Wearing big blond curls/Or standing on a bus stop/Wearing big fake pearls/I don't care/Just as long as they care about me.”

CD Track List
This special re-issue of Home By Dawn is scheduled to be released on February 12, 2016 through Omnivore Recordings.
Posted by Michael Doherty at 2:54 PM