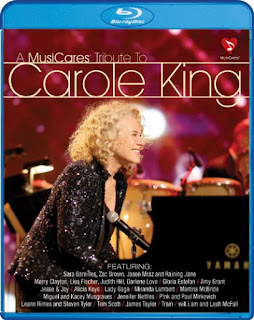 Carole King was honored as the 2014 MusiCares Person Of The Year, and a concert was held in Los Angeles to celebrate, featuring performances by James Taylor, Gloria Estefan, and Alicia Keys, as well as by Carole King herself. I have to admit, a lot of the artists in this lineup were folks I wasn’t familiar with (such as Leah McFall, Miranda Lambert, Martina McBride) or people I wasn’t really interested in (Lady Gaga, someone calling himself will.i.am), but the show overall is quite good.

It opens with LeAnn Rimes and Steven Tyler singing “Hi Do Ho (That Old Sweet Roll)” (and yes, Steven has scarves tied to his microphone stand). This is a good version, with a nice solo on violin. The backing band also has a horn section, which is great. And clearly, Steven Tyler is having a good time (and someone in the audience must have caught his hat). That’s followed by Pink singing “So Far Away,” accompanied by Paul Mirkovich on piano. I’ve never listened to Pink, but here she delivers a good, emotional vocal performance.

Train does “I Feel The Earth Move,” and lead singer Pat Monahan goes to Carole King’s table in the audience and has her join him on vocals. She seems impressed by Pat’s vocal performance, and yeah, it’s pretty good. Lady Gaga does “You’ve Got A Friend,” and really milks it, at the end singing, “Carole, you’ve got a friend” and “Carol, I love you.” Gloria Estefan does a nice rendition of “It’s Too Late,” with a full band. And then a guy who calls himself Will I Am (but writes it as will.i.am, which is fucking obnoxious) says that the songs Carole King wrote changed his life. He sings “Love Makes The World” with a girl named Leah McFall, but it’s actually Leah who sings most of the song. Will just does some kind of rap toward the end. This is definitely one of the weakest moments of the show.

But it’s followed by one of the best performances of the evening – Jason Mraz, Zac Brown, Sara Bareilles and Raining Jane together doing “Beautiful.” This is one of the show’s highlights. First off, there is a cello, an instrument I always appreciate. Plus, it’s a sweet and yet energetic rendition. I wasn’t familiar with Raining Jane before this, but now I plan on looking into this band when I get the chance. Another highlight is “Way Over Yonder” sung by Merry Clayton, Lisa Fischer, Judith Hill and Darlene Love. As you might guess, there are some powerful vocals here, and they are backed tenderly by the band.

Alicia Keys does a pretty good rendition of “Natural Woman.” She is on piano, backed by the band (though eventually she gets up to move center stage). And we see shots of Carole King singing along from her table. Alicia signals the band to keep going just a little longer than they’d planned and sings, “Now Carole told me to take my time right here, she said to make it last.” And of course things get really good when James Taylor comes out on stage to sing “Up On The Roof.” His voice still sounds great, and he is on acoustic guitar, backed by the band.

But the best part is when Carole King herself performs. Neil Portnow, president of The Recording Academy, gives a speech about Carole King and her music, and presents her with the award. She mentions Gerry Goffin in her own speech, and then she performs, first doing “Home Again” with Ahmad El Haggar and Moez Dewad, and then performing with James Taylor (Carole King is on piano, James is on acoustic guitar). They do “Sweet Seasons,” and then James takes over lead vocal duties for “Hey Girl.” That’s followed by a sweet version of “Will You Love Me Tomorrow.” James leaves the stage, and Tom Scott joins the band on saxophone for an excellent rendition of “Jazzman.” The show then wraps up with another version of “I Feel The Earth Move,” with Carole King on lead vocals and most of the other artists returning to back her up.

A MusiCares Tribute To Carole King was released on Blu-ray on June 23, 2015 through Shout! Factory. There are no special features.
Posted by Michael Doherty at 2:14 PM