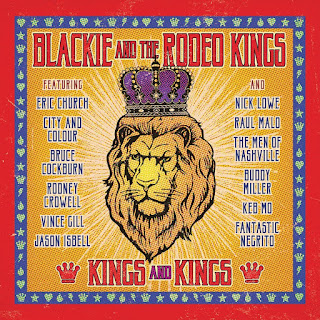 Blackie And The Rodeo Kings have been recording and performing for more than two decades now, and on their new release, Kings And Kings, they are joined by some special guests including Bruce Cockburn and Nick Lowe. This CD features mostly original material, with all three main members contributing songs. The one cover on this album is a song by Willie P. Bennett, the songwriter that inspired the group in the first place. The band’s name comes from the title of a Willie P. Bennett record, and the band’s first album, High Or Hurtin’, was a tribute to that songwriter.

The album opens with “Live By The Song,” the title a play on the idea of living by the sword. This song is about being a working musician, and it was written by all three band members – Stephen Fearing, Colin Linden and Tom Wilson. Here is a taste of the lyrics: “It’s a bittersweet life/It’s a rodeo/So live by the song/Live by the song.” This one features guest Rodney Crowell on vocals. It’s followed by “Bury My Heart,” with guest Eric Church on vocals. “Going to bury my heart deep in the ground/In a hole so deep where it can’t be found/Safe from you/Safe from me/Safe from harm.” I suppose we’ve all wanted to do that at some point in our lives.

This album really starts to pull me in, however, with its third track, “Beautiful Scars,” with guest Dallas Green sharing vocal duties with Tom Wilson. It’s a somewhat mellower song, but with a certain power. Here is a taste of the lyrics: “And I found her sleeping/Out in my car/And the moon shines off her beautiful scars.” (By the way, Tom Wilson recorded an album titled Beautiful Scars under the name Lee Harvey Osmond.) Fantastic Negrito joins the band for another of my favorite tracks, “Bitter And Low,” a soulful, bluesy number written by Tom Wilson. Colin Linden plays electric dobro on this track. I also really dig the bass line by Johnny Dymond. “Here’s a handful of broken hearts/The pain bleeds away/Hey angel, you’re king for a day.” That one is followed by another highlight, “The Secret Of A Long-Lasting Love,” a somewhat happy-sounding tune featuring Nick Lowe on lead vocals. “What is the secret of a long-lasting love/Together ‘til death us do part/While I’m off traveling, you’re back at home/And it’s weighing so heavy on my heart.” Tucker Nelson plays organ on this one.

Bruce Cockburn joins the band on vocals and electric guitar on “A Woman Gets More Beautiful,” a sweet and pretty tune. “A woman gets more beautiful as every year goes by.” That’s true, but I’ve had some trouble convincing my girlfriend of the statement’s truth. Sometimes it’s difficult to see one’s own beauty, I suppose. Some of this one is sung in French, which adds to the track’s beauty. Vince Gill sings on the album’s sole cover, Willie P. Bennett’s “This Lonesome Feeling,” a delightfully sad country song. “You said our love would be forever/Now I don’t have you by my side.” This is an excellent, emotionally engaging rendition. The CD then concludes with a more upbeat tune, “Where The River Rolls,” featuring The Men Of Nashville on vocals. “With a little luck I’ll be ready to go where the river rolls.”

CD Track List
Kings And Kings was released on January 13, 2017.
Posted by Michael Doherty at 8:21 PM