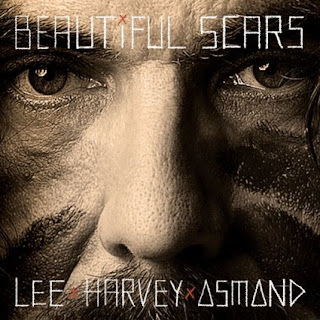 Lee Harvey Osmond is one of the projects of songwriter, vocalist and guitarist Tom Wilson. I first heard him at the end of 2013, when I received the Blackie And The Rodeo Kings disc, South, a really good CD. That album opens with a song that Tom wrote and sang lead on, “North.” And right away I was hooked. His voice struck me as so expressive and so bloody cool. Tom Wilson’s new CD, Beautiful Scars (the third album to be released under the Lee Harvey Osmond name), features all original material, written or co-written by Tom Wilson. And this is one hell of a good CD, produced by Michael Timmins (of Cowboy Junkies). It was released in Canada last year, and next month those of us in the States will get a chance to enjoy it as well.

It opens with one of its strongest tunes, “Loser Without Your Love,” a very cool song with a kind of mean, mellow Dr. John vibe. Yeah, there’s a bit of voodoo hypnotism happening here, and don’t kid yourself that you could be immune to it, because you won’t be. “I’m still in love with the girl that you used to be/A little Jesus walking on your endless sea.” And, being the CD’s longest track, it turns to a delicious little jam for a while before returning to the vocals near the end. This is such a great song. It’s followed by “Blue Moon Drive,” another cool tune, this one with something of a Tom Waits feel. It’s like a combination of whiskey and a haunting at some indeterminate time at night, a road that navigates itself while you hold onto the wheel and stare out ahead. “The night is long, but the coast is far/Crashing under the western stars/Lay your darkness down.” This is a song I’ll be wanting with me on future road trips.

“Shake The Hand” has a different vibe, the guitar at a couple points having a classic garage rock sound, like the Kinks, or perhaps The Who. “Come shake the hand that shook the Earth.” “Shake The Hand” was written by Tom Wilson, Jesse O’Brien and Colin James. Jesse O’Brien plays organ and piano on this album, and also co-wrote the following song, “Oh The Gods,” a tune that has an eerie intimacy. “Have mercy on my head/Because your memory is burning in my bed.” And I love that guitar.

Then “Dreams Come And Go” has more of a folk feel, a good natural vibe, and is another of this CD’s gems. “Are you coming back or going home/All strung out down on my floor/You’re in my dreams, they come and go/Whoa, you come and go.” “Dreams Come And Go” was written by Tom Wilson, Thompson Wilson, Colin James. Thompson Wilson provides some backing vocals. And then check out these lines from “Hey, Hey, Hey”: “When I’m busted and I’m broke/Hey, hey, hey/Would you give this heart some hope/I’ve been looking for a way out/And a way back in to you/So come on, baby/What do you say?” “Hey, Hey, Hey,” was co-written by Andrea Ramolo, who provides backing vocals. And I love Tom Wilson’s vocals when he reaches these deep, intimate, raw places, as on the lines “I always told the truth, but for you I’d lie/I can’t win you, but I’d love to try” from “How Does It Feel.”

“Bottom Of Your Love” is one with more of a straight folk feel, and has a wonderful beauty, with an aching in Tom’s voice. And check out these lyrics: “From the bars where we drown in this hard rock town/I fell for you every night/All my sorrow’s laced with codeine/And the taxis all know my name/They take me away at the end of the day/From my penthouse to the gutter again.” I love this song, and the line “And all of my lovers have skipped town” always makes me laugh. Just one more great tune on this great album.

CD Track List
Beautiful Scars is scheduled to be released in the United States on March 25, 2016 on Latent Recordings. It was released in Canada on April 7, 2015.
Posted by Michael Doherty at 11:00 PM