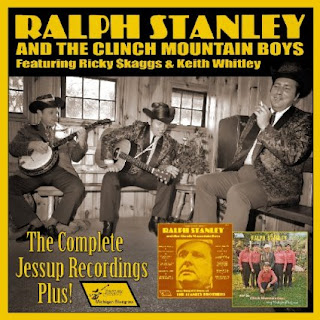 If the topic is bluegrass music, then it won’t be long before Ralph Stanley’s name is mentioned. His music and playing are so influential, and also so damn good. He’s been performing for more than six decades, which is an incredible feat. He had planned on retiring this year, but changed his mind, and is still going strong. That’s a good thing for those of us who love music, that we can still hear new things from this important artist. And now we can also take a look back at some of his earlier material. The Complete Jessup Recordings Plus! contains three albums recorded in 1971. This group features Ricky Skaggs (who was sixteen at the time) and Keith Whitley (who was fifteen), and the story of their joining is recounted in part in this two-disc set’s new liner notes by Colin Escott. The rest of the band includes Roy Lee Centers on guitar and vocals, Curly Ray Cline on fiddle and Jack Cooke on bass.

The first disc contains Ralph Stanley And The Clinch Mountain Boys’ Featuring Keith Whitley & Ricky Skaggs, which was originally titled Tribute To The Stanley Brothers, with the artists listed as Keith Whitley And Ricky Skaggs (Ralph Stanley apparently doesn’t play or sing all that much on these particular tracks). That album was originally released on Jalyn Records in 1971, and features all older songs written by Carter Stanley (and one co-written by Carter and Ralph Stanley). It opens with a really nice version of “We’ll Be Sweethearts In Heaven,” a song that the Stanley Brothers released as a single in 1950. “Darling, do you really love me/Are you the girl I used to know/Something’s happened to you, darling/But it pleases me to know.” But this version actually opens with the lines, “Many lonely nights I’ve traveled/Far across this barren land.” That is followed by a sweet rendition of “Mother No Longer Awaits Me At Home,” the one track co-written by Carter Stanley and Ralph Stanley (and was one of the earliest recordings by the Stanley Brothers). Other highlights include an excellent version of “Lonesome River” and a wonderful rendition of “Too Late To Cry.”

The first disc also contains the first six tracks from Sing Michigan Bluegrass, released on Jessup Records in 1971 (the first of the two Jessup releases). This album features mostly original material, and opens with “Are You Proud Of America,” a then-new tune written by Gene Duty and Ralph Stanley, which asks questions like, “If America calls on you to defend her/Would you be willing to stand by her side?” and “Can you say you’re proud of America?” Remember, this was 1971, and folks were fairly divided on various issues at that time. That’s followed by another tune written by Gene Duty and Ralph Stanley, “Rock Bottom,” one of my favorites. “Rock bottom, rock bottom/I hit rock bottom when I fell in love with you.” Ah, but they sing and play it with such joy and enthusiasm. I love how bluegrass is able to do that, get you dancing to stories of cheating and despair. “Take Me Back” is another delicious and lively bluegrass tune, with some wonderful work on fiddle. This one was written by Roy Lee Centers and Ralph Stanley. “I believe that you could love me/If only you would try/But you’d rather see me lonesome/Than to have me by your side.” The first disc ends with “Hulla-Gull,” a good instrumental tune written by Ray Cline and Ralph Stanley, and actually it’s the disc’s only instrumental. This tune is really driven by the fiddle.

The second disc contains the rest of Sing Michigan Bluegrass, beginning with “Let’s Keep Old Glory Waiting,” another timely number by Gene Duty and Ralph Stanley. I am not into flags or patriotism at all, but there is still some good banjo picking on this song. I definitely prefer the following track, “River Underground,” which was written by Wendell M. Smith and Ralph Stanley, and which tells a great story that starts off in childhood and ends in adulthood, with a loveless woman… or without her. “So we went to the cavern/We strolled hand in hand/I came out alone/The way I had planned.” This is such a great song, and is one of my favorites on the second disc. Wendell M. Smith and Ralph Stanley wrote another of this disc’s highlights, “Daughter Of Geronimo,” which also tells a good story. Other highlights include “Ain’t It Hard,” one of those great, fast-paced, energetic bluegrass songs, with lines like “You’ll tell me more lies than the stars in the skies,” and “Buckwheat,” another instrumental written by Ray Cline and Ralph Stanley.

The second disc also contains the second Jessup release, Gospel Echoes Of The Stanley Brothers, full of glorious bluegrass gospel music. You certainly don’t have to be a believer to enjoy these tunes. This album begins with “Let Me Walk Lord By Your Side,” written by Ralph Stanley, and featuring some wonderful vocals. That’s followed by “In Heaven We’ll Never Grow Old,” a delightful song that seems custom-made to be a sing-along, and is one of my favorites. There is also a really nice rendition of “Working On A Building.” The liner notes credit Ralph Stanley as the writer, but of course that’s just not the case.  Ralph has been around for a hell of a long time, but not long enough to have written this song. On this record, Ralph Stanley And The Clinch Mountain Boys revisit an excellent early Stanley Brothers song, “White Dove,” and this is such a good version, definitely one of the highlights. (By the way, this is a song that Jerry Garcia sang with Old & In The Way in the 1970s.) The CD concludes with “My Main Trial Is Yet To Come,” written by J. L. Frank and Pee Wee King, and another of this album’s highlights.

CD One
CD Two
The Complete Jessup Recordings Plus! was released on February 5, 2016 through Real Gone Music.
Posted by Michael Doherty at 9:20 PM