The Color Of Noise Blu-ray/DVD Review 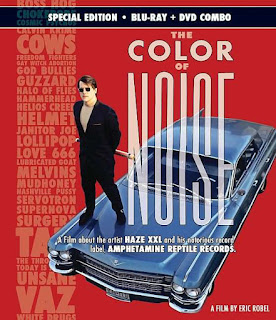 The Color Of Noise is a completely enjoyable documentary about Tom Hazelmyer and his record label, Amphetamine Reptile, and the punk bands that have been part of that label. It was released as a two-disc set – one disc being the Blu-ray, the other being the DVD. There is plenty of great music and lots of interviews with members of bands like Cows, The Thrown Ups, Lubricated Goats, Surgery, Helmet, and Unsane.

And of course there is material from interviews with Tom Hazelmyer. He himself was a member of the band Halo Of Flies, and the documentary includes interviews with his bandmates. Tom made the first record in order to raise his chances of his getting the band signed to another label, and sold the records out of the trunk of his car. Interestingly, the label name Amphetamine Reptile came from a guy in his barracks in the marines mishearing a line from a Motorhead song, “Love Me Like A Reptile.” Tom talks about how Twin Tone Records helped with the manufacturing and distribution, and about the series of compilations titled Dope, Guns ‘N’ Fucking In The Streets, one of which included the first track by Mudhoney.

There are also interviews with other people who worked for the label, as well as interviews with some of the artists who created the album and poster art, including Frank Kozik and Chris Cooper. The documentary treats us to lots of shots of the great artwork. And of course there is old concert footage. There is also footage from a concert in 2010 to celebrate the 25th anniversary of the label, with performances by Melvins, The Thrown Ups, God Bullies, Hammerhead and other bands. Because really this documentary ends up being more about the bands, the music, than it does about Tom Hazelmyer. There are lots of great anecdotes, like the information about the five bands touring in London. One thing that struck me was how often band members mention acid, because I don’t normally associate LSD with punk music.

Even though the film is two hours, it does feel like a lot of stuff is just touched upon. I wanted it to go into more depth in certain areas. And then at the end it spends a bit too much time on a montage of people describing Tom Hazelmyer. Still, it really is an enjoyable documentary. And be sure to watch the entire end credits sequence.

Apart from the commentary track, the special features are only available on the Blu-ray disc and not on the DVD. Just so you know. The commentary track is by director Eric Robel and editor Michael Dimmitt, who play a drinking game as they watch the movie.

The other special features include The Enthusiasts, with interviews with two videographers who shot concert footage. We see some of that footage, including stuff from 1989. There is also a rough cut of the original opening of the film, including footage from Lincoln, Nebraska, and stuff about Charlie Burton. “AmRep Does Subpop” is about some singles and the original cover art. There is an interview with Tom Hazelmyer from 1992. There is also footage of performances by Cows, Hammerhead, Surgery, Janitor Joe and Unsane. The special features also include the Kickstarter promo, a poster gallery and the film’s trailer.

The Color Of Noise was directed by Eric Robel, and was released on Blu-ray and DVD on November 24, 2015 through MVD Visual.
Posted by Michael Doherty at 5:28 PM