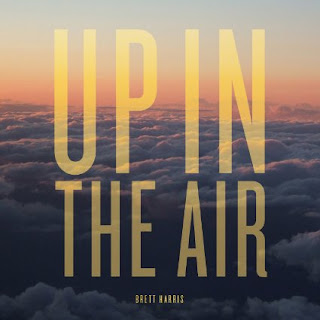 It seems like we’re hearing a lot from The dB’s and their extended musical family these days. And that’s a good thing. The latest offering is one of the best – Brett Harris’ new CD, Up In The Air.  Brett Harris has performed with both The dB’s and Big Star, and he is based in North Carolina, where this album was recorded (part of it was recorded at Modern Recording, which was started by Chris Stamey). All songs on this CD are originals, written by Brett Harris, and he can certainly write some damn good pop songs that are both catchy and meaningful. By the way, Skylar Gudasz, another of member of that extended family, provides some backing vocals on this album. (Skylar has a track on The dB’s And Friends’ Christmas Time Again! CD.)

The album opens with “End Of The Rope,” which begins with a guitar lick that reminds me strongly of The Beatles. And when it kicks in, it becomes an absolutely delicious, bright pop song.  “Maybe it’s wrong, but I just don’t care what’s right/As long as I’ve got you here with me tonight.” And I love the long pause before “tonight.” “End Of The Rope” is followed by a sweeter-sounding, prettier pop tune titled “Don’t Look Back,” which is another of my favorites. Most of us can relate to lines like “But I’m proceeding carefully/Because I don’t want my poor heart to be broken again.” There is something warm in his delivery, even as he sings of missed opportunities, “So baby, just once grant me this last request/Don’t look back when you go.” And check out these lines: “Believe me when I say/How I wish that I could stay/Trade all my yesterdays/For the chance of one tomorrow.”

There is something really catchy about “Lies,” both in the music and the pattern of the vocal line. Like on lyrics like these: “Seems my mind’s made up/But my heart, it feels so hollow/The unintended consequence of bitter pills I’ve had to swallow.” And then suddenly this track takes an interesting and fun turn, dipping into a twisted old jazz feel, which I totally love. This song has an odd ending as well. This is probably my favorite track. Another track I am especially fond of is “Rumor.” It has an interesting combination of musical vibes, with a kind of cool, slow groove, some nice work on keys, and then suddenly this great horn rising up toward the end. “Down to the wire/And under the gun/You shrug it off, but you know, you know, you know/You ain’t foolin’ no one.”

“Up In The Air,” the CD’s title track, is another of the album’s highlights. It’s a sweet and kind of quirky combination of pop and folk elements. “I confess/Without you I’m a mess/I need your tenderness/So, darling, reconsider.” The album concludes with “Spanish Moss,” an interesting and pretty song. What I particularly love about this track is that moment when the backing vocals come in. They raise the song to a place of beauty. And from there, the song becomes more powerful emotionally, with wonderful touches on strings. It’s a gorgeous ending to this CD.

CD Track List
Up In The Air is scheduled to be released on March 4, 2016 through Hit The Deck Recordings.
Posted by Michael Doherty at 9:02 PM