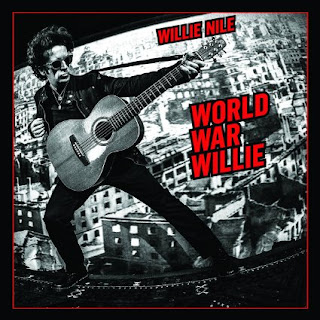 I’m always excited when a new Willie Nile CD arrives, because I know there will be some excellent songwriting, some delicious vocals and some surprises. If I Was A River, his 2014 release, had a more stripped down sound, focusing on his vocals even more than usual. His new album, World War Willie, is full of energetic rock and roll tunes, songs that demand some volume, some of them with plenty to say. Like, for example, “Let’s All Come Together,” in which he sings, “Now some may want to fight and some will go to war/But after all these centuries who even knows what for.” But don’t worry – Willie Nile doesn’t take himself all too seriously. Listen to “Grandpa Rocks.” The line “His hair what’s left grows down to his socks” made me burst out laughing the first time I listened to this disc. There is a whole lot of energy here, and a lot of fun. This CD is made of mostly original material, and some interesting characters populate these tunes. And it’s all delivered with that distinctive voice.

This disc kicks off with “Forever Wild,” which begins like a great classic rock burst, and tells a good rock and roll story of youth and holding onto it. “Now people may come and people may go/And things can fall apart/But this I swear and this I know/You’re still here in my heart…forever.” And hey, on the line “Sixteen and crazy,” he sounds like Meatloaf, right? “Forever Wild” was written by Willie Nile and Frankie Lee. That’s followed by another lively tune, “Let’s All Come Together,” about improving the state of the world together.

Willie Nile then displays a bit of good-natured humor, directed even at himself (as he’s a grandfather), in “Grandpa Rocks.” I think it was Grace Slick who said no one over the age of fifty should rock. Willie Nile is certainly taking up an opposing viewpoint here, and for my money, Willie wins the argument, no question. “Grandpa rocks, Grandpa rocks/He ain’t quite ready for the pine top box.” This song mentions the Rolling Stones, and at the very end there is a humorous reference to their song “Get Off Of My Cloud.” The album’s title track, “World War Willie,” also shows his sense of humor. It begins with a pointedly juvenile rhyme, “I got a girl and she comes from France/She looks so good in her underpants.” But then it builds from that, with funny lines like “I got a girl and she comes from Mars/She lives on cake and candy bars” and “I got a girl and her name is Jean/She puts my dog in her washing machine.” And I love these lines: “Well, I know a woman on the east coast/She fries my eggs and she burns my toast/She’s the one I like the best/That’s why I have to move out west.” This is fun rock and roll.

With “Bad Boy,” Willie Nile gets rough and bluesy. “I’m a bad boy, I ain’t no good/They’re gonna love me out in Hollywood.” It’s a good song, though it uses that “self”/“shelf” rhyme, which always bothers me. It’s followed by “Hell Yeah,” a really good rock and roll tune to get your body moving, and one that will likely have you shouting along as well. Then suddenly we get this kind of beautiful and sweet love song, “Beautiful You.” But it certainly is no standard love song, for it has Willie Nile’s particular style and spin, with some unusual, unexpected lines. Check out these lyrics: “Who laughs inside the raindrops and says just let it pour/Who navigates my crazy and parks it by the door/Beautiful you, beautiful you.” Play this song for that special person in your life. It’s one of my favorite tracks.

It’s followed by another of my favorites, a fun song titled “When Levon Sings,” which was written by Willie Nile and Jefferson Grizzard. It’s about Levon Helm, who died in 2012. “Once upon a time was a drummer in a band” is a funny line, as the name of the band in question of course is The Band. Helm sang lead on most of my favorite Band songs. This CD concludes with its sole cover, “Sweet Jane.” This version is closer to Lou Reed’s solo version than to the original Velvet Underground version, but Willie Nile also adds his own spin to it, particularly that section with the groovy bass line during the lines “Some people like to go out dancing/You and me, we gotta work.” This is a really good, energetic rendition.

CD Track List
World War Willie is scheduled to be released on April 1, 2016 on River House Records.
Posted by Michael Doherty at 4:40 PM