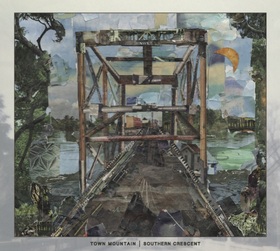 I got turned on to Town Mountain recently when the band released The Dead Session, an EP containing two songs associated with the Grateful Dead. Being a big Grateful Dead fan, I’m always excited to hear how new artists will interpret that band’s music, and I loved what Town Mountain did with “Mississippi Half-Step Uptown Toodeloo,” making it a sweet country tune. But I hadn’t heard any of Town Mountain’s original material, so I didn’t really know what the band was about. Now with the release of Southern Crescent, I have a pretty good idea, and I am definitely on board. This band does some great bluegrass music, with influences from other realms, like country and rock. When I was still in my teens I briefly dated a girl whose parents were in a bluegrass band. The music was so fun, so pure, so natural, so honest, so true, and I saw how it united people in a way that a lot of music seemed unable to. That group gave me a lasting appreciation for this music, and so I am excited to hear new bluegrass bands. Not that Town Mountain is all that new. Southern Crescent is actually the group’s fifth CD. It features original material, with four band members contributing songs. These songs have both a fresh and traditional sound. Nick DiSebastian plays bass on this album, and Dirk Powell plays drums on several tracks.

The CD opens with one of those delicious fast-paced bluegrass instrumentals. Titled “St. Augustine,” it was written by the group’s fiddle player, Bobby Britt, and yes, it features some wonderful work on fiddle. That’s followed by “Ain’t Gonna Worry Me,” a song turning what was once heartache and loneliness to happiness. Ah, bluegrass can do that so well. “So many miles between us now/I’m gonna do just what I please.” “Ain’t Gonna Worry Me” was written by mandolin player Phil Barker. From there, we go a song about desiring to close the distance between a traveling musician and his gal. “Comin’ Back To You” has a bright, peppy feel, and was written by guitarist Robert Greer and Mark Bumgarner. Here is a taste of the lyrics: “Two shows in Alabama/Down to Louisiana/Saturday is Baton Rouge/Then I’ll be flying through that Buncombe County line/Comin’ back home to you.” (Town Mountain is based in Asheville, North Carolina.) This track features some rock and roll piano by guest musician Wilson Savoy (giving us a Jerry Lee Lewis energy). Joel Savoy plays fiddle on this track.

One of my favorite songs is “House With No Windows,” written by banjo player Jesse Langlais. It’s a beautiful, slower song, and yes, the simple but effective banjo reminds me of Kermit the Frog (that’s a good thing). I also love the vocals, the lyrics delivered with great, emotional country ache. “This dollar in my pocket is worth two on the table/And if you’ve got the notion, I’m willing and able/This dollar in my pocket is gonna burn away the blues/Gonna burn the fire between us long as you let it do.” This is such a beautiful song. Another of my favorites is actually another tune written by Jesse Langlais, “Long Time Comin’.” Right from the beginning, the fiddle makes me smile, and then the blending of vocals on the chorus is wonderful. And I like these lines: “If you see her, tell her I love her/There’s no one gonna rise above her/If there’s fire in her eyes and desires on her mind/Tell her that I want her to come home.”

The music takes on a more Irish feel for the sweet instrumental, “Leroy’s Reel.” I wonder if that’s why I so instantly took to bluegrass music. Perhaps I was predisposed to it because of the similarities to Irish folk music. Anyway, I love this track, which was written by Bobby Britt. Nick DiSebastian plays guitar on this one. I am also really fond of “Tick On A Dog,” written by Robert Greer. This song has energy and attitude. “You’re like a tick on a dog/Just bleeding me dry.” And there is some great playing here. But actually that’s true of every track. There isn’t a weak tune here.

CD Track List
Southern Crescent is scheduled to be released on April 1, 2016 on LoHi Records.
Posted by Michael Doherty at 3:46 PM