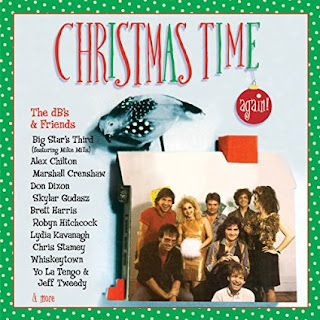 Every autumn, Christmas albums are unleashed on the public, and most of them are bad. That’s because most of the traditional Christmas songs are awful (read my critique of “Rudolph The Red-Nosed Reindeer,” for example). But Christmas Time Again! piqued my interest, mainly because of the artists involved. The dB’s of course contribute several tracks, and Chris Stamey adds a couple as a solo artist, but this disc also includes tracks from Marshall Crenshaw, Robyn Hitchcock and Yo La Tengo & Jeff Tweedy. The other thing that got me interested is that the majority of the tracks are originals. You won’t find yet another rendition of bloody “Jingle Bells” or “Santa Claus Is Coming To Town” here, and amen to that. Not all of these songs are winners, but most are, making the album worth owning. I’ll be adding several of these tunes to my Christmas play list.

This album has been released a few times before, but with some different tracks, a slightly different cover, and different liner notes. It was released in 1986, in 1993, and again in 2006, each time with some different tunes. The new ones this time include “The Sounds Of Christmas” by Skylar Gudasz, “It’s Christmas” by Lydia Kavanagh, “Eight Day Weekend” by Yo La Tengo and Jeff Tweedy, “In The Bleak Midwinter” by Birds And Arrows, “The Day Before Boxing Day” by Robyn Hitchcock and “Remember (Christmas)” by Brett Harris.

The CD opens with “Christmas Time,” a harmless little pop tune by the dB’s, with something of a 1960s vibe. This is the song that has opened each of the four versions of this album. Here is a taste of the lyrics: “I can’t believe it’s Christmas time/Where is the year we left behind/The summer went so fast/The fall went roaring past/And we watched it disappear.” Suddenly toward the end there is a roaring (though brief) drum solo that caught me by surprise the first time I listened to this disc. It’s not a bad song, but I much prefer the following track, “Holiday Spirit,” also by The dB’s. It’s a fun, fast-paced tune written by Peter Holsapple, and it’s one I’m definitely adding to my Christmas play list. This song first appeared on the second version of this album, the one released in 1993. It has some silly, delightful lyrics like “I went on a shopping spree/I want to be your Christmas tree/Watch me change from red to green to red” and “Well, Santa comes when no one's looking/Hang me up inside your stocking/I'll be sure to tell him what we want/What we want.”

Another highlight of this CD is Marshall Crenshaw’s rendition of “(It’s Going To Be A) Lonely Christmas,” a song written by Ralph Freed and Grace Saxon, and originally recorded by The Orioles. Marshall Crenshaw does a really wonderful job with it, and his vocals are just perfect. (By the way, just a month ago Marshall Crenshaw released #392: The EP Collection.) And then Skylar Gudasz delivers a pretty rendition of “The Sounds Of Christmas,” one of new tracks to this collection, and one written by Tim Madigan. This song is just right for a quiet late night, as snow falls outside. Also new to this album is Lydia Kavanagh’s “It’s Christmas,” another pretty tune.

This CD includes Whiskeytown’s “Houses On The Hill,” a mellow and moving country song written by Ryan Adams and Caitlin Cary, and originally included on that band’s 1997 release, Strangers Almanac (and included on the 2006 version of Christmas Time Again). I also really like “Christmas In The Only Time,” written by Wes Lachot, with the lines, “Now Christmas is the only time, Christmas is the only time I think of you” and “I don’t know if I miss you, or I miss the memory.” This track was on the 1993 version of this album.

One of the most interesting tracks on this release is the live version of “Eight Day Weekend” by Yo La Tengo and Jeff Tweedy. This is one of the new tracks, but it’s an old tune. Originally titled “Seven Day Weekend,” this was written by Doc Pomus and Mort Shuman and recorded by Gary U.S. Bonds. It is one of the many songs that rhymes “self” with “shelf,” a rhyme I never care for, but other than that, it’s a good tune. The version by Yo La Tengo and Jeff Tweedy becomes “Eight” in honor of Hanukkah. There are two other live tracks on this CD: Don Dixon’s “I Saw Three Ships” and Big Star’s “Jesus Christ.” And the strangest track is Ted Lyons’ “The Only Law That Santa Claus Understood,” a song that has been included on all four versions of this album. “’Cause the point of a gun was the only law that Santa Claus understood/So there’s old Santa at the poker table with some pretty shady company.” And I love this line: “He’s frightening all in red.” This is another that will be going on my Christmas play list, for sure. Ted Lyons’ other contribution to this release, “Santa’s Moonlight Sleighride,” will also have a spot on this list. It’s a delightful instrumental track. This collection’s other instrumental is the excellent “It’s A Wonderful Life” by Chris Stamey, which includes a bit of “Greensleeves.”

Another favorite of mine is “In The Bleak Midwinter” by Birds And Arrows. The song is based on a poem by Christina Rossetti, set to music in the early 1900s by Gustav von Holst. This version by Birds And Arrows is absolutely beautiful, and it focuses just on the first verse. I love the instrumental section. This is another of tracks new to this version of the CD, and it is wonderful.

Robyn Hitchcock’s “The Day Before Boxing Day” is another interesting and odd track, delivered as spoken word, with a couple of different voices, a strange conversation that is definitely amusing. Check out lines like these: “Christmas, let’s face it, is a miserable occasion, an oasis of artificial light in a dark wasteland” and “Nobody loves their family, except crazy people.” This is one of the new tracks. The album concludes with another new one, Brett Harris’ nice rendition of Harry Nilsson’s “Remember (Christmas).”

CD Track List
Christmas Time Again! is scheduled to be released on October 16, 2015 through Omnivore Recordings.
Posted by Michael Doherty at 1:59 PM