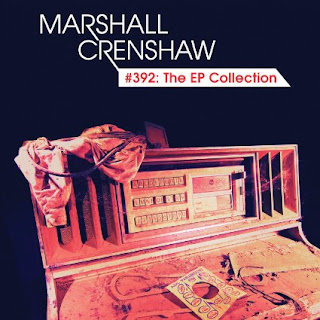 Marshall Crenshaw released a series of six EPs on vinyl over the last several years, each containing three tracks: a new original tune, a cover, and a new version of one of his older songs. Now a compilation of some of those tracks has been released on Addie-ville Records through Red River Entertainment. Titled #392: The EP Collection, this CD contains the original material and the covers, plus two bonus tracks. Many of the original songs were co-written by Dan Bern. In the liner notes, Marshall Crenshaw mentions how their friendship was cemented by a near-death experience on a flight in Alaska. The original songs are organized in reverse-order, with the most recent original track kicking off the album, and then moving backward through time. Then, interestingly, it moves forward again with the covers from those same EPs, ending with “Made My Bed, Gonna Lie In It,” from the most recent EP.  These vinyl EPs were available through a subscription, and it’s great that two thirds of the tracks are now available on CD to a wider audience.

This compilation opens with “Grab The Next Train,” the title track to the most recent of the EPs, which was released in May of this year. It’s a beautiful song of longing, and of doing something about it. “I got a notion that won’t leave my brain/I’m on my way downtown to grab the next train.” This song really works for me, perhaps in part because it makes me think of my girlfriend traveling by train all the way across the country to see me (which she’s done several times). And I totally relate to the line, “On a plane I feel like I’m in a cage.” “Grab The Next Train” was written by Marshall Crenshaw and Dan Bern, and is one of my personal favorites.
It’s followed by “Move Now,” which was also co-written by Marshall Crenshaw and Dan Bern. This was the title track to the EP released in November of last year. It has a little more of an edge, particularly to the blue-rock guitar part. “I put my shoes on my feet/Stepped out the back door into the burning heat/I left a note to say/Take whatever you want, I’ve gone away.” Marshall Crenshaw plays all the instruments on this track, something that’s not all that unusual for him. He’d done that on even some of his earliest recordings.

The lines from “Red Wine” that stood out for me the first time I listened to this CD were, “Well, the clouds rolled in today/And I tried to stop them/Then I heard your tales of woe/And I tried to top them.” I love those lines. And “Driving And Dreaming” is a tune I’ll add to my road trip song list, with lines like “I’ve been leaving a trail of smoke and dust behind/Flying by and laughing at the speed limit signs” and “And I’m fighting a losing battle/With the Oklahoma wind/The joy’s gone out of the joy ride/And I’m still nowhere, here I am still nowhere, nowhere near the end” and “Nothing but a wide open road as far as I could see.”

The last of the original tunes is “I Don’t See You Laughing Now,” the title track from the first of the EPs. “It must be hell to realize/That you fell for your own lies.” It is followed by the first of the covers, Jeff Lynne’s “No Time,” also from I Don’t You See You Laughing Now. “No Time” is an interesting tune that was originally released in 1971 on The Move’s final album (just before they became ELO). And Marshall Crenshaw does a great job with it. Among the instruments he plays on this track is toy piano. He is joined by Plink Giglio on mellotron, Glen Burtnick on guitar and backing vocals, and PK Lavengood on guitar. An even more surprising cover is The Carpenters’ “(They Long To Be) Close To You,” which was written by Burt Bacharach and Hal David. Marshall Crenshaw delivers an earnest and pretty rendition, which features Steve Bernstein on trumpet.

From there, Marshall Crenshaw goes to classic rock for a cool version of The Bobby Fuller Four’s “Never To Be Forgotten,” on which he plays all the instruments and does all the vocals. He also plays everything on the following track, “Right Here Now,” an excellent song written by James McMurtry (and included on his 1995 album, Where’d You Hide The Body). I always liked the opening lines, “Somebody’s calling/It don’t mean a thing/If I don’t feel like talking/I just let it ring.” Marshall Crenshaw then returns to 1960s music for a cover of The Lovin’ Spoonful tune, “Didn’t Want To Have To Do It,” from their Daydream album, and once again he plays all the instruments. He then concludes with another 1960s song, The Easybeats’ “Made My Bed, Gonna Lie In It,” from the Grab The Next Train EP.

The CD contains two tracks that are not from the EPs. The first is a cover of The Everly Brothers’ “Man With Money,” recorded live in January 2014 soon after Phil Everly died. The second is a demo of “Front Page News,” a really good song Marshall Crenshaw co-wrote with Leroy Preston and recorded in the 1990s. “You lay all the blame right at my feet/This almost reads like a scandal sheet/It says we're through/It's front page news.”

CD Track List
#392: The EP Collection was released on August 21, 2015 on Addie-ville Records through Red River Entertainment. And no, I don't know what's up with the CD's title. In 1999, Marshall Crenshaw released an album titled #447, which I read was a joke on the amount of music he'd created. So the fact that this is a smaller number released at a later date... Well, perhaps he's re-evaluated the earlier joke. If anyone knows (including Marshall himself), please feel free to leave a comment. Thanks.
Posted by Michael Doherty at 9:43 PM