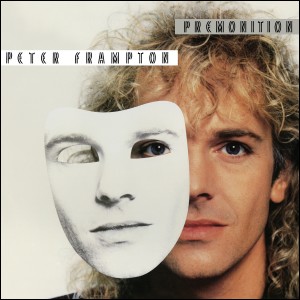 Peter Frampton’s Premonition was originally released in 1986, a full ten years after Frampton Comes Alive!, and yet it seems we were still comparing everything he put out to that record. And 1986 was not a great year for music. The joy of the 1983, 1984 pop records was basically gone, and the sounds were getting stale. This was the year of New Kids On The Block and Billy Ocean and Whitney Houston and Janet Jackson and Europe and Stryper and Salt-N-Pepa. Synth sounds were everywhere. Peter Frampton is of course known for his guitar work, and Premonition has quite a lot of synthesizer, with the guitar adding nice touches and accents, but certainly not driving most of the material. But there are still some really good songs here, including “Lying” and “Into View.” And this special re-issue includes two bonus tracks and new liner notes by Scott Schinder, featuring parts of an interview done with Peter Frampton.

Premonition is unmistakably an ‘80s album right from the opening notes of its first track, “Stop.” It nearly screams, 1986! Beneath all those 1980s trappings is something of a love song, with lines like “We've seen heartache and we've seen rain/You and I have made it through again/I will stand by you/No matter what you do/I will always be your lover and your friend/So this story will not end.” “Stop” was written by Peter Frampton and Mark Goldenberg. It’s followed by “Hiding From A Heartache,” which is also so clearly an ‘80s track. This is really an album of its time. But again, if you can get past those mid-1980s sounds, you can appreciate this track. “When I'm faced with the memory of love/And it's you that I want but you're not enough.” “Hiding From A Heartache” was written by Peter Frampton, Arthur Stead and Steve Brougton Lunt.

“Premonition,” the album’s title track, is a fairly good rock tune, with a steady beat and some nice work on guitar. It was written by Peter Frampton and Rob Sabino. That one is followed by “Lying,” which was released as a single, reaching #74 on the Billboard chart. This is a good, strong song, one of the best tracks on this album. This one makes really good use of those 1980s sounds and simultaneously rises above them. Then “Moving A Mountain” opens with a guitar riff, which gets me excited. There is a certain power to this 1980s rock tune, making it another of this record’s highlights.

But my favorite track is “Into View,” a tune I love right from its opening. It has a good groove, and some catchy elements. And it certainly doesn’t hurt that the guitar takes prominence here (including a bit of that talking guitar sound Peter Frampton is so famous for). “But there's always another hill to climb/And never enough of that precious time.”

This special re-issue contains two bonus tracks. The first is “So Far Away,” which was included as the flip side to the single of “All Eyes On You.” “You left me without a reason/Not saying goodbye/I can remember you said you’d stay/All that’s so true, girl, until yesterday/You’re so far away.” “So Far Away” was written by Peter Frampton and Daryl Stuermer. The second is “Nothing At All,” which is from the soundtrack to the 1986 Kevin Bacon film Quicksilver. Here is a taste of the lyrics: “I never liked history/It's a thing of the past/If I lived to a thousand years/Would time still go so fast/I've been up to the mountaintop/I had to look down/Nobody ever greets you there/Only you and your prayer/But there's nothing at all, nothing at all/In my way.”

CD Track List
This special re-issue of Premonition is scheduled to be released on August 28, 2015 through Omnivore Recordings.
Posted by Michael Doherty at 6:42 PM