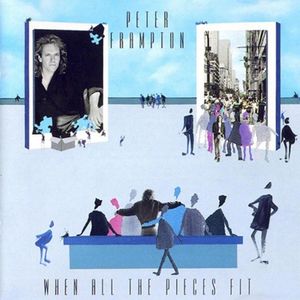 When All The Pieces Fit was the second Peter Frampton album on the Atlantic label, following 1986’s Premonition. To my ears, When All The Pieces Fit is a much better album. It still has quite a lot of synthesizer, as well as some drum machine stuff (which I never appreciate), but the focus seems much more on the songwriting. Also, the guitar has a lot more prominence. Unlike the re-issue of Premonition, this disc contains no bonus tracks. It does, however, include new liner notes by Scott Schinder, with bits from an interview with Peter Frampton.

The album opens with “More Ways Than One,” written by Peter Frampton and Danny Wilde, and straight off, this disc definitely has a 1980s pop thing going on, but is not quite as much a product of its time as was the previous album. There is a positive bent to this track, with lines like, “I believe there are more ways than one/Any door can be opened.” It’s a song in which he woos a woman. “I knew I was in trouble when I saw you for the first time/’Cause you’re a little bit different, you’re driving me wild/I’m gonna make you love me even if it takes a lifetime.” However, by the end, his perspective has changed a bit, and he’s decided he doesn’t want to spend a lifetime wooing her: “Don’t wait too long to come around/I might be nowhere to be found/And you’ll be standing all alone.” It’s interesting that as he’s come to be a bit less patient, he also comes to think that if she’s not with him, she’ll be alone.

One of the album’s most interesting tracks is “People All Over The World,” written by Peter Frampton and B.A. Robertson (Robertson is also on synthesizer and backing vocals). It opens with the chorus, which finds Frampton joined by several other vocalists, including Alfie Silas, Mark Williamson and Jean McClain, giving it the feel and power of an anthem. “People all over the world/Here and now are in suffering, struggling to be free/You’re there in your little world/I’m in mine and we’re mumbling, crumbling/What about me?” I found myself singing along to this track pretty quickly.

“Back To The Start” is a fairly straight-ahead rock tune, which was pretty refreshing in 1989. It was written by Peter Frampton and Danny Wilde (Wilde provides backing vocals on this track). “Now And Again” is one of my personal favorites. It has both beauty and energy, and again the focus is on the vocals, the lyrics. “Maybe you still hear the echoes/As they make their escape/There was nothing so special here/We need time to debate/I offer no explanations/For those who remain.” I also really like John Regan’s work on bass. “Now And Again” was written by Peter Frampton, John Regan and B.A. Robertson. It’s an excellent song.

The album concludes with another of its best songs, “This Time Around,” which has a sweet and uplifting feel. Here is a taste of the lyrics: “No one breaks this time around/Life just takes us where we're bound/Hear the music playing/We know what it's saying now/Lost until we're found/And we're found this time around.” Nice, eh? Plus, it features a saxophone solo by Sam Riney. “This Time Around” was written by Peter Frampton, Will Jennings and John Regan. I love how this album ends on such a positive note: “It's our time this time around.”

CD Track List
This re-issue of When All The Pieces Fit is scheduled to be released on August 28, 2015 through Omnivore Recordings.
Posted by Michael Doherty at 8:33 PM