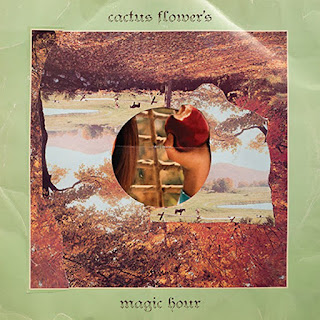 Cactus Flower is the project of Jess Lewis, who wrote or co-wrote all of the tracks on the new release, Magic Hour (the debut CD under the Cactus Flower name). She also does the vocals and plays many of the instruments, including guitar, piano and percussion. She is joined on certain tracks by Levon Campbell on keyboard and piano, Dave Ewenson on drums, Evan Cardwell on bass, Asa Brosius on pedal steel, and Cailean Lewis on vocals. And, in case you were wondering, yes, this is another excellent disc out of Canada. Jess Lewis is based in Halifax. You might also know her from her work with Dark For Dark.

Jess Lewis opens this album with “China Blue,” a simple and delightful folk song. Her voice is somehow one of both innocence and experience. “Headed out into the world/That brave little girl/All she wanted was something to do/China Blue.” That’s followed by “Darkest Hour,” a truly fun rock tune with a catchy rhythm, and some interesting, unexpected changes. “Times are good, some times are tough/But you keep on doing your stuff/Not a thing can get in your way.” I love the mix of the fun groove with those stranger, darker passages. Then “Summertime” has a pretty folk feel. “Watching the trees/Sway in the breeze/Catching a sneeze/And God bless you/And bless me too.” It’s the line “And bless me too” that made me first love this song, just way she adds it.

“Jojo” a fun country rock song that feels like it should play at an old-time ice cream parlor or something, mainly because of the work on keys. In other words, I love it. There is something completely fucking adorable about Jess Lewis, the way she sings, her attitude, her vibe, everything. “Jojo” was written by Jess Lewis and Lacey Haynes. And that’s Levon Campbell on keys on this track. “Gonna find out what went wrong/Too late, but not before too long.” This is one of my personal favorite tracks. And then “Left The Lights On” is a wonderful piano instrumental. It’s kind of mellow, but with a sort of timeless quality that I admire and enjoy.

“Lose Your Head” is a quirky, fun song, featuring Cailean Lewis on vocals (I love the way he happily sings, “You’ve got to shut your mouth and lock it”). It’s insanely, delightfully catchy, and is another of my favorite tracks. There is a certain 1960s thing happening here that I totally dig. “Lose Your Head” was written by Jess Lewis and Lacey Haynes. Also written by Jess Lewis and Lacey Haynes is “Lady In Red,” which features Asa Brosius on pedal steel.

The album then concludes with “You Messed Up,” a song that begins as a kind of groovy country rock number with a prominent bass line, but becomes a psychedelic little gem that owes a bit to both The Beatles and Syd Barrett. It’s a very cool track, another highlight of this CD.