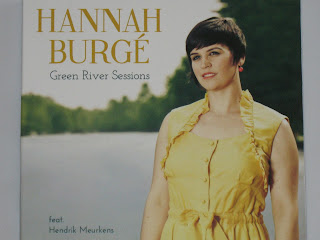 Vocalist Hannah Burgé’s debut album, Green River Sessions, is a nice mix of jazz and world music elements. Though she is based in Ontario, clearly part of her soul is residing in Latin America. Approximately half of the CD’s tracks are originals. She is backed by some excellent musicians, mainly the trio of Robi Botos on keys, Paco Luviano on bass and Mark Kelso on drums. (Paco Luviano also produced this album.) And Hendrik Muerkens is featured on harmonica on two tracks.

Green River Sessions opens with an original composition, “Art Of Living,” which was inspired by the music of Cuba. “I want to be in the ocean/Surrounded by great love.” Luisito Orbegoso provides some vocals on this track, during a gorgeous call and response section in the second half of the song. And the vocals certainly are the focus, but the band provides some excellent backing. I particularly enjoy Mark Kelso’s work on percussion.

Hannah Burgé follows that with “Be My Love,” one of the album’s covers. This is a popular song written by Nicholas Brodzsky and Sammy Cahn. What strikes me immediately about Hannah Burgé’s rendition is the harmonica, which I completely love. That’s Hendrik Meurkens on harmonica (the sound of which reminds me oddly of Judd Lander’s harmonica on “Karma Chameleon,” that sort of beautiful, smooth, soaring sound). This version is obviously quite a bit different from Mario Lanza’s original version. It has more of a dance rhythm. Hannah Burgé then tackles “Black Velvet,” a pop song written by Christopher Ward and David Tyson and made a hit by Allanah Myles in 1989. That version had a distinct blues feel. Robin Lee then had a country hit with it, using it as the title track to her 1990 record. Hannah Burgé puts her own spin on this hit tune, though keeping some of the blues in her vocal delivery. Her version features Tony Zorzi on guitar, and there is a nice bluesy lead guitar section. This album concludes with a slightly shorter version of “Black Velvet.”

“I’m In,” an original composition by Hannah Burgé, features Kelly Jefferson on saxophone. I’m not all that fond of the lyrics to this one, but the music is really good. The instrumental section to “Nica’s Dream” is also fantastic, with Robi Botos contributing some impressive and delightful work on keys. And I love what Mark Kelso does on drums, joined by Jalidan Ruiz on congas for this track. “Nica’s Dream” was written by Horace Silver, and has been covered by a large number of artists over the years, including The Jazz Messengers and Mel Tormé.

Hendrik Muerkens joins Hannah Burgé on harmonica again for “Sunshine Samba,” one of this album’s original compositions, and one of my personal favorites. There is so much joy in this track, particularly toward the end. And check out that delicious lead on harmonica halfway through. It's followed by “Serenity,” also written by Hannah Burgé, the CD's only really mellow track, a beautiful song that showcases Hannah's vocal talent. “Joy in my heart/And you on my mind/The world and its forces align/Carry me home.”

CD Track List
Green River Sessions is scheduled to be released on October 2, 2015 through Music Village.
Posted by Michael Doherty at 6:06 PM