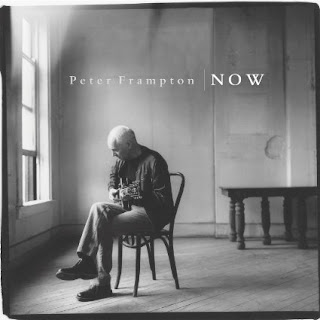 I worked as an extra for a week or so on Almost Famous (at the time referred to as Untitled Cameron Crowe Project), a movie for which Peter Frampton provided some music and worked as a consultant. The movie was about a band called Stillwater, and several scenes were concert scenes. Well, at one point work stopped on a concert scene, and it was announced that Peter Frampton was going to play for us. And indeed, he came out on stage and did a short concert. It was unexpected and a total joy – probably the best time I ever spent as an extra. And it rekindled my interest in his music. So when his next CD, Now, came out in 2003, I bought a copy and was largely impressed by its eleven tracks, all but one of which are originals. And actually one of the songs on this release, “Hour Of Need,” was written for Almost Famous. Now Omnivore Recordings is re-issuing this album. There are no bonus tracks, but there are some new liner notes by Scott Schinder, including bits from an interview conducted with Peter Frampton.

Now kicks off with a solid rock tune, “Verge Of A Thing,” with a nice heavy groove. It was written by Peter Frampton and Gordon Kennedy (who co-wrote the majority of this CD’s material). Gordon Kennedy also plays guitar on this track. Here is a taste of the lyrics: “But oh, as hard as I try, there's no explaining this/It ain't the wine or the dope that's talking/It ain't your psychic on Benzedrine/No, I have been to the mountain and I have a dream/Baby, we're on the verge of a thing.” It’s followed by “Flying Without Wings,” which begins with some good bluesy guitar, which right away gets me on board. This song has a nice groove and some positive lyrics, like these lines: “Take to the skies/You're flying without wings/Get up and do it again/You've got to make the wind your friend/You might just find you'll float away/Sit back, enjoy the ride/You've got to trust what's there inside.”

“Love Stands Alone” begins as a mellower, prettier song, then kicks in with a power for the chorus (“Doesn’t matter/Doesn’t matter to her…”). “Love Stands Alone” was written by Peter Frampton, Gordon Kennedy and Bob Mayo. The lines that always stand out for me are: “Once I was captured/By the fire in her eyes/Now when I look I see the whites of her lies.” “Not Forgotten” also begins as a mellower, acoustic tune, and when it kicks in, it retains that feel. There is something really pretty about this song, and it’s one of my favorite tracks on this release. Here is a taste of the lyrics: “Those who went before/Why are they remembered/They held our hands/And sang us songs/Lived their lives ‘til they were gone/But not forgotten.”

“Hour Of Need” was written by Peter Frampton, Gordon Kennedy and Wayne Kirkpatrick for the film Almost Famous, where it is performed by the fictional band Stillwater (not to be confused with the actual 1970s band Stillwater, who interestingly use that talking guitar effect on their song “Mind Bender,” the effect that Peter Frampton famously used). “Hour Of Need” is a really good song, and stands up well on its own, away from the film for which it was written.

I usually think it’s a good idea to discourage songwriters from writing about their children, because often the resulting songs are their worst material. It’s like how parents expect everyone else to think their children are as amazing as they do. But there is something undeniably sweet about Peter Frampton’s “Mia Rose,” written about his daughter. It’s certainly not the album’s strongest track, but it’s kind of adorable. It was written by Peter Frampton and Kimmie Rhodes. “I’m Back” is a good rock song, though I could do without the reference to The Terminator, which kind of detracts from the song a bit, making it a bit more goofy. “I’m back/Like Schwarzenegger in Terminator.” Unfortunately, the line is in the chorus, so it’s repeated several times.

The following track, “I Need Ground,” is a much better song, with some nice percussion by Blair Masters. “I need ground/Somewhere soft to land/When I come down/Somewhere it's safe to stand.” Then comes the CD’s sole cover, a good rendition of The Beatles’ “While My Guitar Gently Weeps.” It opens with a thoughtful, arresting guitar solo, and features some excellent guitar work throughout. Don Fields plays acoustic guitar on this track. It leads into “Greens,” which also begins with an introspective-sounding guitar solo, and is the album’s only instrumental track. It's a wonderful tune, with the guitar at times playing the part you might imagine a lone late-night saxophonist would play. It was written by Peter Frampton and Bob Mayo, and features Jed Leiber on keyboards.

The CD then ends with one of my favorite tracks, a sweet and positive number titled “Above It All,” written by Peter Frampton, Gordon Kennedy and Wayne Kirkpatrick. Here is a bit of the lyrics: “It's me and you/Chasing sunshine until tomorrow/What will we do/If the sky cries and turns to sorrow/I see us picking up/The pieces when they fall/Rising above it all.”

CD Track List
This re-issue of Now is scheduled to be released on September 4, 2015 through Omnivore Recordings, following re-issues of Frampton's 1986 release, Premonition, and 1989 album, When All The Pieces Fit.
Posted by Michael Doherty at 2:15 PM