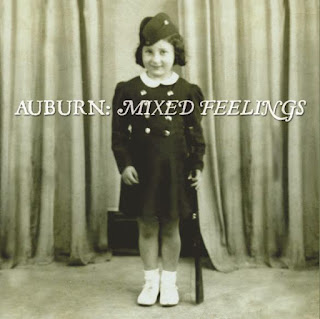 Auburn is a British band that was formed by vocalist and guitarist Liz Lenten in 1999, then temporarily separated approximately a decade ago. They reunited in 2011, coming on strong, with Indian Summer the following year and then Nashville in 2014. And now they have a new CD, titled Mixed Feelings, on which the band dips into a good range of musical realms, including folk, blues, country and pop. All of the tracks are originals, written or co-written by Liz Lenten. This album, like the previous one, was recorded in Nashville, and features musicians from the area rather than the official band members from the UK. Those assembled for this release are all accomplished musicians, and most of them played on Nashville as well. The album was produced by Thomm Jutz, who also plays guitar on it (you might know Jutz from his work with Nanci Griffith).

Auburn kicks off the new album with its title track, “Mixed Feelings,” a tune which has a nice bluesy edge. There is also a cool rhythm on drums by Lynn Williams, and some good work on guitar. But it is Liz Lenten’s vocals which are the focus. Hers is a voice with a lot of character, a voice that seems to almost effortlessly draw in listeners. “I’ve got mixed feelings/Of love and hate/And I can’t function in this state.” “Mixed Feelings” was written by Liz Lenten and Mark Gustavina. And then “Love Lost Its Way” has something of a relaxed 1970s vibe, particularly on the chorus. “This time, I know/Love’s lost its way home/My tears roll slow/Love lost its way home.”

“Friends” is a sweet, gentle, warm song that I really love. The song is like a needed reminder that we’re not alone. But it refrains from making impossible promises, and so it has a beautiful honesty. Check out these lines: “I can’t mend your broken dreams/But I’m your friend/Won’t pretend that I can keep/The demons from your sleep/I’m your friend.” Wonderful, right? This is one of my favorites. And it’s followed by a delightful, quirky, humorous song, “Hell Hath No Fury.” This one is told from the perspective of an obsessed nut, beginning by saying “Sure we can just be friends,” but soon saying, “So you don’t forget me, I’ll keep messing with your head” and then “I’ll call every hour just to check that you’re all right/I’ll intercept your mail so no one else can write.” By the way, the line “Hell hath no fury like a woman scorned” is a slight rewording of a line written by William Congreve (not William Shakespeare, as many believe). The line is, “Heaven has no rage like love to hatred turned/Nor hell a fury like a woman scorned.”

“Crystal Stairs” has a really cool, catchy groove, helping to make it another of this disc’s highlights. This one also features some good harmony vocals, as well as excellent work on guitar. I’m also really fond of “Out There,” mainly because of Liz Lenten’s vocals, as she sings, “You won’t be alone, I swear/You will find love out there/You don’t need to be scared/Of a new life out there.” “Wood For The Trees” is another favorite. It has such a delicious vibe, and I love Justin Moses’ work on both fiddle and banjo. “I know I’m losing you/I know you’re just moving through/You’re slipping fast/My time is past/Oh, I know I’m losing you.” This is an excellent song.

Musicians on this release include Liz Lenten on lead vocals; Lynn Williams on drums; Mark Fain on bass; Justin Moses on fiddle, banjo and dobro; Barry Walsh on piano, Wurlitzer and organ; JT Brown on harmony vocals; and Thomm Jutz on guitar.

Mixed Feelings is scheduled to be released on September 11, 2015 through Bat Country and Scarlet Records.
Posted by Michael Doherty at 12:40 PM