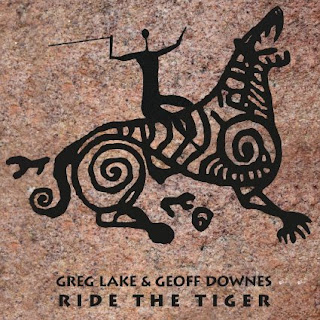 Last month, an early recording from Keith Emerson was released, The Keith Emerson Trio. Last month also saw the release of his ELP bandmate Greg Lake’s previously unissued collaboration with Geoff Downes, Ride The Tiger, which was recorded in 1989-1990. While I’m not quite as fond of this CD as I am of the Keith Emerson disc, it is certainly worth listening to. After all, these are two musicians who’ve had quite an impact on music. Greg Lake is obviously known for his work with Emerson, Lake And Palmer and King Crimson, while Geoff Downes is known for his work with Asia and Yes. Greg Lake actually joined Asia briefly for concerts in Japan after the departure of John Wetton in 1983, and that was the first time the two musicians played together. Several years later they got together, along with Michael Giles on drums, to record the music on this disc. All of the tracks here are originals, written by Greg Lake and Geoff Downes. The music is certainly a product of its time, with regard to sound. There is no mistaking that late 1980s sound. Some of these songs were re-recorded later for other releases, (and a couple of tracks were included on a compilation), but with the release of Ride The Tiger, we have all of the original recordings for the first time.

The album opens with “Money Talks,” a song which would find its way onto From The Beginning: The Greg Lake Retrospective. It has a strange, angry sort of tone. “King of kings, they pull the strings/’Til they run you down/No matter what you’ve undergone/The measure of success/Is how much you can charge it on American Express/Believe me, money talks.” Interestingly, this song would be reworked and released as “Paper Blood” on the 1992 Emerson, Lake And Palmer album Black Moon. Some of the verses are the same, but the chorus is different, as is the sound. If you’re a fan of that song, you’ll enjoy hearing the original version here.

That is followed by “Love Under Fire,” a song that was reworked for inclusion on the 1992 Asia album Aqua. This begins as a prettier tune, and I immediately like it. I think this version is much better than the one on that Asia album, especially the vocals (and that cool bass lick). “You can hide in the jungle/You can climb up a tree, yes you can/You can scan the horizon/Tell me what do you see? Nothing.” This disc also includes an alternate mix of this song. This song was also included on From The Beginning: The Greg Lake Retrospective.

“Affairs Of The Heart” would end up on ELP’s Black Moon, in a reworked rendition. The version here is quite different in its sound, without the acoustic guitar. It has more of electronic feel, and it kicks in with more power than on the other version. “Street War” would also be released on an ELP album, In The Hot Seat, in a very different form. Not only is the sound different (and a bit slower) here, but the lyrics are also somewhat different. This version begins with the second stanza (and even then it’s slightly altered, from ELP’s “But still I see no compromise” to “You offer me no compromise,” for example): “Eyes ablaze with virtue, you raise the sword of state/You offer me no compromise, it's my heart upon the slate/I’m driven to the ledges, just one step to the wire/We're under siege, it's face to face, one spark can start a fire.”

“Check It Out” is a decent rock tune. Here is a taste of the lyrics: “Twist and turn, I just can’t sleep/She’s driving me crazy/I’ve gone too far, I’m in too deep/She simply amazes me/Crush me like a hurricane/Let me pick up the pieces.” It is followed by “Blue Light,” which is one of my favorite tracks on this disc. It has a slower, more mellow vibe, with a kind of haunting quality at times. And I really like the vocals. Check out these lines: “When I look into the mirror, I don’t recognize my face/Something in this room ain’t right, I can feel it like a chill/So tell me why when I am moving does my shadow just stand still” and “’Cause there is only one way into here, but no way out.”

CD Track List
Ride The Tiger was released on November 27, 2015 on Manticore Records.
Posted by Michael Doherty at 4:40 PM