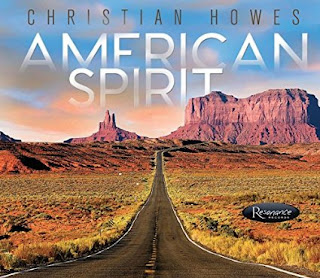 Jazz violinist Christian Howes’ new CD, American Spirit, features some excellent original material as well as some familiar tunes and even a bit of pop culture with a cover of a television sitcom theme song. He is joined by Josh Nelson on piano, Hamilton Hardin on organ and piano, Ben Williams on bass and Gregory Hutchinson on drums. And vocalist Polly Gibbons joins him for two tracks; the rest are instrumentals.

Any album that kicks off with drums is one I’m prepared to enjoy, and Christian Howes’ rendition of Leonard Bernstein’s “America” begins with a nice intro on the drums by Gregory Hutchinson. This tune is from West Side Story, and this rendition maintains some of the Latin feel, while the violin adds to the song’s beauty. I also really like Josh Nelson’s work on piano here. That is followed by a cover of Joni Mitchell’s “Both Sides Now.” I’m not sure about this rendition. I love the violin, of course, but the beat and groove in place here work against the song for me. Perhaps it’s because this is one of my favorite Joni Mitchell songs and it always affects me emotionally, and the groove in this version keeps that from happening.

The following track, “Once Upon A Time In America,” however, is completely emotionally engaging. This beautiful piece is the theme to the 1984 film of the same name, and was composed by Ennio Morricone. This rendition was arranged by Tamir Hendelman, and features not only some great work by Christian Howes on violin but also some pretty work by Josh Nelson on piano. And then approximately halfway through, Ben Williams has a good lead spot on bass.

And then Ben Williams opens the next track, “Just A Closer Walk,” one of my favorites of this CD. I love the way the bass and violin work together at the beginning, sounding both pretty and playful. “Just A Closer Walk With Thee” is a traditional gospel song, and here it becomes a very lively instrumental tune, with all of the musicians really shining. On this track, it is Hamilton Hardin on keys, and he delivers some wonderful work. Interestingly, that is followed by Samuel Barber’s “Galop,” an absolutely delightful, even whimsical, piece from the ballet “Souvenirs.” I particularly love the lead on bass halfway through the track, and the way the drums and piano continue with light touches beneath it. It’s wonderful, another of this CD’s highlights. Josh Nelson did the arrangement for this track. Perhaps the oddest choice for covers, however, is Bob James’ “Angela,” the theme to the television series Taxi. It’s an excellent theme (to an excellent show), though I’m not sure I’ve heard it covered before. On Bob James’ LP, the song is more than five minutes long, and here Christian Howes plays the full song, arranged by Tamir Hendelman. Hey, am I crazy, or do you hear a phone ringing in the background at 1:59?

Polly Gibbons provides vocals for two tracks on this release. The first is a really good rendition of “T’aint Nobody’s Bizness,” a song that has been written various ways over the years (“Ain’t Nobody’s Business,” “Tain’t Nobody’s Biz-ness If I Do,” “‘Tain’t Nobody’s Bizness If I Do” and so on), and also attributed to several people. Here it is attributed to Fats Waller, but it is generally credited as having been written by Porter Grainger and Everett Robbins. Tamir Hendelman did the arrangement for this version, which features a wonderful vocal performance by Polly Gibbons as well as some nice work by Christian Howes on violin, and a nice big finish. The other track featuring Polly Gibbons on vocals is an odd rendition of “Shenandoah.” I don’t like the arrangement here at all, for it lacks the beauty this song almost always has. If it weren’t for the lyrics, I don’t think I’d even recognize the song.

“American Spirit,” the CD’s title track, is the first of the three original compositions by Christian Howes, and it is one of the most interesting tracks. It begins with a brief violin solo, sounding like something from a cool, slower bluegrass tune, then slides easily into more jazzy territory. The second of the original tunes is “Amazing,” a wonderful track with a catchy, positive groove. This is probably my favorite track on this release. It has something of a pop flavor, and it makes me smile each time I listen to it. The third original composition is “Postlude,” which concludes the album. This is an excellent violin solo piece. Howes also did the arrangements for these three tracks.

CD Track List
American Spirit was released on CD on October 30, 2015 on Resonance Records.
Posted by Michael Doherty at 2:44 PM