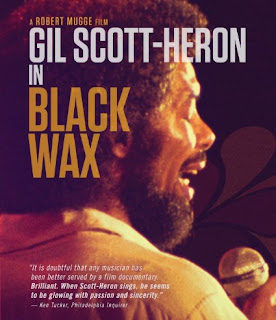 Black Wax is a wonderful documentary about Gil Scott-Heron, in which the talented singer and poet is largely allowed to tell his own story, through both concert footage and intimate-feeling footage shot in Washington, D.C. Gil Scott-Heron was a musician with something to say, and he said it through the music. Even when speaking, as there was music and a great rhythm to his speech. This film was shot in 1982, and was originally released in early 1983. It opens with a brief bit of lighthearted business involving wax sculptures, and then gets right into the music with live footage of him performing the reggae-infused “Storm Music” (from his then-recent LP Reflections).

The film then shows him walking along the Potomac, carrying a boom box and riffing on the fact that we’re all dead ducks with Ronald Reagan in charge (remember, this documentary came out in 1983 at the height of that bastard’s reign), before singing a politically charged and socially conscious tune, “Washington, D.C.,” a then-new song which kind of functions as the centerpiece of the film, as the film returns to it periodically. Gil Scott-Heron also provides a walking tour of Washington, D.C., to the places where the commercial tours refuse to go.

In the live footage, he talks about his background, how he studied the blues, and how he was born in Chicago, raised in Tennessee, then moved to New York (before settling in D.C.). “When you move somewhere, the first thing that you try to do is get in touch with the music, you know, find out where the music is you’re going to be grooving on,” he says. Gil Scott-Heron is part singer, part poet, part storyteller, and part comedian, and he jokes that in New York you don’t have to go looking for the blues, as the blues will find you. He is sometimes incredibly funny, as when he talks about poetry, recounting a moment in school when a classmate remarked, “This must be deep.” Gil Scott-Heron comments: “‘This must be deep’ means, like, I recognize all of these words individually, but damn if I can get anything out of the order in which they currently appear. This must be deep.” And he asks, “Why would you need a poet to make things more complex?” I also appreciate that in the concert footage, the songs are largely presented in their entirety.

Included in the concert footage is a performance of “Gun,” with a nice introduction about what led to writing that song. This song is still so important – perhaps even more so now, actually. There is a great intelligence and wisdom to his music, which only adds to our enjoyment of it. In addition, there is hope and strength in these songs. The music addresses issues and problems, but in a positive sense, never veering toward despair or surrender. Like in “Alien,” he sings, “You have got to hold onto your dream.”

The film stays with him at all times. Sure, there are some close-ups of other musicians in the concert footage, like shots of the bass player doing some fantastic stuff during “Angel Dust,” but none of them are interviewed. There is no other voice or perspective but his, which is interesting, and gives the film a very intimate feel. Toward the end, he talks again of Ronald Reagan and the current state of the country, how it used to be a country with its eye on tomorrow, but changed to looking to its past. He says the country wanted John Wayne, but had to settle for Ronald Reagan. And at the end he sings, “This ain’t really your life/It ain’t nothing but a movie,” an interesting line for the end of a documentary film.

Is That Jazz? provides more live concert footage, beginning with a great jam, with Gil Scott-Heron then coming out to talk about music labels and definitions. It seems this must have been at the beginning of the performance. It is approximately nine minutes, and starts right up after the movie ends.

Black Wax was directed by Robert Mugge (he also produced and edited the film), and was released on Blu-ray on November 13, 2015 through MVD Visual.
Posted by Michael Doherty at 9:13 PM