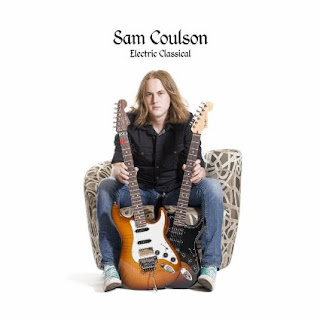 Sam Coulson is known for his work with the rock band Asia, which he joined in 2013 when Steve Howe left. At that time, he was twenty-six years old, less than half the age of the other members. He has now released his first solo album, Electric Classical. And what a delightful surprise this CD is. I expected, from the title and cover, that it would be rock versions of classical pieces (which might have been cool too). But this CD actually contains gentle and serious renditions of several short classical numbers on electric guitar, and it’s quite good and enjoyable.

Sam Coulson opens with the album with “Ave Maria,” a piece written by Johann Sebastian Bach, with a melody added by Charles Gounod a century later. Coulson plays two guitar parts on this track, with the melody having a more electric sound (though both parts are played on electric guitars). He follows that with another piece by Bach, “BWV 1007 Prelude,” a beautiful selection composed for cello. On guitar it doesn’t have quite as full a sound, but it still works. The beauty is different, but still present, and Sam Coulson handles it well. He also performs “BWV ANH 114,” also known as “Minuet In G Major.” There is some question about who composed this one, however. Coulson attributes it to Bach, but it seems most people now believe that Christian Petzold wrote it. Coulson delivers a slow, sweet rendition on guitar.

He also covers the work of Fernando Sor, beginning with “Op. 35 No. 22,” a piece that was actually composed for guitar (as many of his compositions were). It has a soft, pretty feel. “Op. 35” is a series of exercises, and Coulson performs two of them on this disc, the other being “Op. 35 No. 17.” Also from Sor, Coulson performs “Op. 6 No. 11,” and this is actually one of my favorite tracks. It’s so moving. This CD also contains a piece from another Spanish composer, Francisco Tarrega – “Recuerdos De La Alhambra,” one of his most well-known compositions, which was also written specifically for guitar. Here Sam again plays two guitar parts. On electric guitar, it doesn’t have that same tremolo effect as on the classical guitar, but interestingly has a more soothing sound.

Another of my favorite tracks is Sam Coulson’s interpretation of Antonio Lauro’s “Vals Venezolano No. 2,” which has a certain beauty. This piece was also composed for guitar. Perhaps the most interesting interpretation on this CD is that of Beethoven’s “Moonlight Sonata,” here retitled “Moonlight Sonata Blues.” This piece was originally composed for piano, but of course has been performed on classical guitar. On this CD, Sam Coulson performs it as two parts on electric guitar, and as the title suggests, he gives it a definite blues feel on the lead guitar part. This isn’t the full piece, by the way. The CD concludes with “Romance,” also known as “Romance Anónimo,” a piece written for guitar. Coulson delivers a beautiful performance here, another of this CD’s highlights.