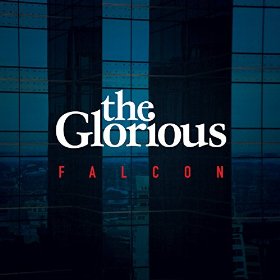 The Glorious is a band based in Melbourne, Australia, made up of Dave Mather on vocals, guitar, piano and keyboards; Dan Gard’ner on drums, percussion and vocals; and Joel Loukes on bass. Their new album, Falcon, is their third full-length CD (following 2013’s Sweetwater), but the first to be released in the United States (the band’s self-titled EP did get a U.S. release). It’s a beautiful and emotionally engaging pop and rock album of all original material, written by Dave Mather. Dave Mather also co-produced the album, with Julian Mendelsohn, who is known for producing music by the Pet Shop Boys, Paul McCartney and The Firm, as well as for recording music for Belle And Sebastian.

The album opens with “Toward Neptune,” which in some ways reminds me of some 1970s classic rock, mainly in the vocals, which have a somewhat relaxed feel to them. “Flying for Neptune/Am I in danger at all?/Am I in danger at all?” It’s followed by “Ease The Load,” which begins with more force, and briefly makes me think of Stephen Stills (again, in the vocal line). “Hour by hour/Week by week/Your money’s down/No time to think/Time to ease the load.” Danny Stain plays guitar on this track (as well as several others on this CD). Claire Higgins provides some backing vocals.

“Falcon,” the CD’s title track, is one of my favorites. It has a mellow, pretty vibe, and a nice bass line. Here is a taste of the lyrics: “I’ll rest/With the world hanging over my bed/Just a voice in my mind/I’ll race/With the wind and the sun in my face.” Tom Hoskins provides some vocals on this track. Another highlight is the following track, “Whispers All Around Me,” partly because of the addition of pedal steel. That’s Chris Altmann, by the way. Altmann also plays pedal steel on “Into The Sands” and “Summer Fade Away.” “Into The Sands” is beautiful, and is another of my favorites.

“The Wave” is an interesting track, with a sort of slowed-down Bo Diddley beat prominent in the mix, and an electronic pulse below it, adding a sort of urgent feel to it. Paul Ruske and Ben Grayson play keyboards on this track. The album concludes with the gorgeous “I Wake Up,” which was released as the album’s single, along with a music video (the video has an appropriate dreamlike quality). Interestingly, this song was also included on the band’s self-titled debut EP, where it was the lead-off track. This is such a moving song, driven by vocals and piano. Check out these lyrics: “Help me/See what you’re seeing/Is this how it’s supposed to be?/And I wake up/Thinking that I didn’t/And I break up/Thinking that I did.” I love this song.

CD Track List
Falcon is scheduled to be released January 8, 2016. (I hope the band’s earlier two CDs will receive proper releases here in the states as well.)
Posted by Michael Doherty at 2:54 PM