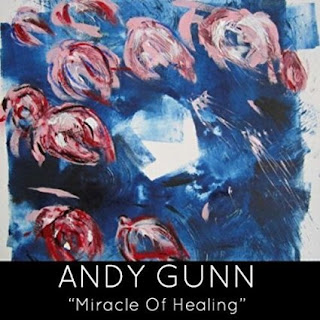 Andy Gunn is a blues artist who has had his share of troubles (or perhaps more than his share), particularly with regards to his health. He was born a hemophiliac, and received a contaminated blood transfusion in his youth. And he has suffered through cancer. Twice. And of course, there was that mental breakdown, which resulted in incarceration. And so the title of his new album, Miracle Of Healing, is not just a catchy phrase; it’s a hell of a lot more personal than that. But of course healing is what the blues is all about, taking a bad situation, and singing it out, turning it into music and taking its power and making it your own. Certainly, Andy Gunn knows all about that. As he sings on “Harmony Of One,” “I’ve been hurting so long/But now that hurt has gone.” And this album should do the same for everyone who listens to it. There are lots of positive vibes here, and some wonderful songs, all of which are originals. Though this is largely a blues album, there are also strong folk and rock elements.

Miracle Of Healing opens with “Are We Thru?” Yes, the misspelling of “through” bothers me, as it always does, but this is a good blues tune. The first line is “Oh baby, you’ll miss me when I’m gone,” which makes me think of “I Know You Rider.” But it also has a bit of a dire sound when you think it’s coming from someone battling cancer. An interesting line to choose to open this album. But of course this is about being mistreated by a lover, and about getting away from that person: “One of these days, you’ll look for me and I’ll be gone.” That’s followed by “Black Heart,” which has a lighter, more fun vibe, particularly on keys and in the backing vocals. And there is some really nice work on electric guitar in the instrumental section toward the end. “A thousand daggers in my back/When will it be enough for your black, black heart?”

“Beyond The Open Door” is a sweeter song, sounding closer to the folk rock realm, both in the music and the vocal approach. Of course, there is still a bluesy element to the electric guitar. This is actually one of my favorite tracks. “I feel you, though I can’t touch you/I’m hoping you’ll show me more/I’m searching, still yearning/For what’s beyond the open door.” Andy Gunn then goes back to the blues with “Brighter Days,” but with a playful vibe, especially in those “shoop shoop” backing vocals. There is a levity to its groove, and some nice work on harmonica, making this another favorite of mine. It has a very positive feel. “I’ve got a feeling things are only going to get better/From now on.”

“Hold On” also has a sweeter and pretty folk feel, and interestingly is about his own vulnerability and weaknesses, and about overcoming them. It begins with the line “Please don’t look into my eyes,” a strong opening line. This song just immediately put its hooks into me and doesn’t let go. Another highlight is the CD’s title track, “Miracle Of Healing,” a soft blues number. “I’m still yearning/Though we’re apart/For the miracle of healing/That will soothe my heart.” The album concludes with another pretty tune, “Road That Leads Back Home,” with some wonderful backing vocals.

Miracle Of Healing is scheduled to be released on CD on February 5, 2016 on Market Square Records. It was made available as a download on July 31, 2014.
Posted by Michael Doherty at 3:57 PM