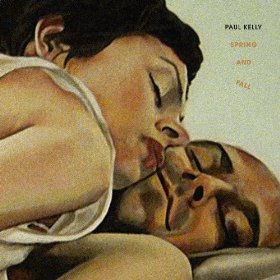 Paul Kelly's new studio release, Spring And Fall, is an album of love songs that manages to stay clear of cheesy or sappy sentiment. And I think that's due to the great honesty of the album. I think cheesiness results from a line or a feeling being forced and false - like when someone says what he thinks he should be feeling rather than what he feels. Paul Kelly completely avoids that trap. I mean, hell, just listen to "Someone New." That song surprised me with its opening lines: "I want to sleep with someone new/Someone I've never met/Knowing it's a foolish thing to do" (though of course it is the presence of cello and violin that really makes me love it).  These aren't all feel-good love tunes. These songs investigate and explore different aspects of love and relationships. (For example, listen to "None Of Your Business Now.")

And let me just say this here and get it out of the way: Yes, there are moments that remind me of Bob Dylan (particularly in "For The Ages" and "Little Aches And Pains").  And that is certainly not a bad thing. This album is quickly becoming one of my favorites of the year.

Spring And Fall opens with "New Found Year," which is seriously pretty. Sometimes a guitar can sound so sweet and comforting, and that's how this song - and album - begins. And then Paul Kelly's vocals come in with a wonderful affection to match it. The first line is, "Come with me, love, bring your wine, love." This is an unabashed and earnest love song, about a young love. "Slip your shoes off/Let me help your dress down to the floor."

"When A Woman Loves A Man"

"When A Woman Loves A Man" describes how love affects a person in her entirety. I love the lines, "When a woman gives herself she goes out on a limb/Her body cannot help but tell the story that’s within." But it's the line "A woman's love seeks its companion" that really struck me as interesting, because it's the emotion that's in control, not the person - like our bodies and minds are along for the ride.

"For The Ages" is one of my favorites, partly because though it's a strong love song, its lyrics show a quirky sense of humor (something I always appreciate). Check out lines like "Darling, you’re one for the ages/You’ll never go out of style/You walked into the ball/Dressed by St Vincent de Paul" and, of course, "Long may you live in my rhyme/The years will cut us down/But they won’t keep us in the ground/Out of the grave we’ll climb."  And it's a sweet folk love song with some nice touches on electric guitar by Dan Kelly. This is the kind of song that itself never goes out of style - as long as people still fall in love, as long as we still connect on some meaningful level. This song actually makes me feel better about people - you know?

"Gonna Be Good" begins with a promise: "I'm gonna be good from now on." (To a woman? To himself? I first heard it as the latter.) This is one I immediately felt a connection to, even before the lines, "I wrote a list, I thought it best/Of all that must apply/I wrote a list, it didn’t take long." (Anyone who knows me knows I put everything into lists, and maybe that's part of what delighted me about this song.) This track is kind of simple, and yet perfect in that simplicity.

"Time And Tide" is another really strong tune, perhaps the best of the album. It quietly grabs you and holds you. I love songs that are able to do that. Here is a taste of the lyrics: "Time and tide wait for no-one/And they won’t wait for you or me/You got to know/When to stay and when to go/When to do, when to be."  I'm also fond of these lines: "No matter what you think or do/Sometimes it really isn’t up to you/You just got to get out of the way."  And the whole feel is perfect. There are some excellent backing vocals by Vika and Linda Bull.  This song also features Genevieve Lacey on recorder.

"Sometimes My Baby" is another excellent tune. There is a lighthearted feel to the music (heck, there's even a jaw harp).  But then check out these lines: "Sometimes my baby takes a little trip/She gives me no warning, just gives me the slip/I hold her and kiss her and whisper her name/But she’s somewhere else, I’m right out of the frame/Oh, it’s nothing I’ve done and it’s nothing I’ve said/Nothing to do with my loving at all/I wish I could take out the knives in her head/Like a stone in a pond she falls."  Fantastic, right?  Yet it's the instrumental section two minutes in that really caused me to completely fall for this song. Seriously, you're going to love it.  That's Atilla Kuti on violin.

In "I'm On Your Side," Paul Kelly sings, "You’re just hanging on to your pride/Oh, hold on to me now/I’m on your side." Sometimes that's all we need to hear. And I really like the line "I'm on your side though you might not believe it."

In "Little Aches And Pains" Paul sings about meeting the other person a while after the relationship is over. He sings of how the great pain is now little aches, but they seem there for good. "When all else goes, they remain." It's like things have become better to a point, but that's as good as they will get. And yet the song has a positive end with the line, "I don’t count my losses now, just my gains."

There is a hidden song after "Little Aches And Pains." It begins at 4:07. I am not a fan of hidden tracks on CDs. That being said, I do love this song, titled "Where Are You Roaming."  For those who aren't familiar with this one, it was written by William Shakespeare and is featured in his comedy Twelfth Night. It's sung by Feste in Act II Scene iii, after Toby asks for a love song. I'm a huge Shakespeare fan, and I have to say Paul Kelly does a wonderful job with this song.  Even without this track, Spring And Fall is one of my favorite albums of the year. But one sure way to completely win me over is to throw in a bit of Shakespeare. (By the way, this song is sometimes also referred to as "O Mistress Mine.")