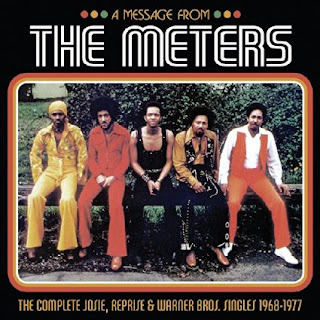 The Meters, like Booker T. & The MGs, were successful backing other artists, and had hits and plenty of great material on their own as well, including lots of memorable instrumental numbers. A Message From The Meters: The Complete Josie, Reprise & Warner Bros. Singles 1968-1977 is a two-disc set featuring much of the band’s best material, produced by Marshall E. Sehorn and Allen Toussaint. The first disc contains the Josie singles, and the second disc has the Reprise and Warner Bros. singles. This set includes liner notes by Bill Dahl. The Meters still exist as The Funky Meters, but at the time of these recordings the band was made up of Art Neville on organ, Leo Nocentelli on guitar, George Porter Jr. on bass, and Joseph “Zigaboo” Modeliste on drums. And then Cyril Neville joined on percussion and vocals.

The first disc opens with “Sophisticated Cissy,” the band’s debut single, a groovy, somewhat relaxed instrumental number credited to the entire band and released in 1968. Its flip side, “Sehorns Farms,” is likewise credited to the group. The second single, “Cissy Strut,” is one that should be familiar to everyone (if not this version, then one of the many covers). This great, fun instrumental funk track reached #4 on the R&B chart and #23 on the Billboard Hot 100. It was also the lead-off track on the band’s self-titled debut LP. It has such a cool vibe to it, a great song to play at a party. It was paired with “Here Comes The Meter Man,” which is a lot of fun too, and features some good work on organ and some great stuff on guitar over that steady funky rhythm. And it goes into a drum solo as the track fades out.

“Dry Spell” is one of my favorites from this early period, with its groovy beat and catchy hooks. I do wish it were longer (the track is only two minutes or so). I’d love to hear them jam on this one for several more minutes. Its flip side, “Little Old Money Maker,” is another highlight. That’s followed by the first track of the collection to include vocals (but no real lyrics) – “Look-Ka Py Py,” a fantastic tune that reached #11 on the R&B chart and #56 on the Billboard Hot 100. “Chicken Strut” actually begins with some odd shouting before diving head-first into the funk. This one has some actual lyrics (“You just keep on strutting”), as well as some – well – chicken noises, and is another favorite. Like “Look-Ka Py Py,” it reached #11 on the R&B chart, but went a little higher on the pop chart, reaching #50. “Hand Clapping Song” also features some simple lyrics (“Clap your hands now, people clap now/Clap your hands now, people, clap your hands”), and also, as you might expect, hand claps. Yeah, there isn’t much to it, but it’s fun and effective.

“A Message From The Meters,” the song that gives this compilation its title, is the first track in the collection not to be credited to the entire band, but rather just to Leo Nocentelli. And the message? “Get with it, people/Don’t let time pass you by/We can make it/We can make it if we try.” And then, “Get together, get together/We got to get together.” Nothing like a great, funky tune to get people together. Like “Groovy Lady,” also written by Leo Nocentelli. This one was the flip side to “Stretch Your Rubber Band,” and it’s yet another highlight of the first disc, a really cool instrumental.

“(The World Is A Bit Under The Weather) Doodle-Oop” is an interesting track. It was written by Leo Nocentelli and Vincent Toussaint (Allen’s brother), and contains a nod to “Feelin’ Alright” in its lyrics: “The world is a little bit under the weather/And I’m not feeling too good myself.” Its flip side, “I Need More Time,” begins as a slow number, which comes as something of a surprise, sounding so different from everything that’s come before, but it’s not too long before it kicks in, and then things are back to normal.

The second disc opens with “Do The Dirt,” a song that was included on the band’s 1972 LP, Cabbage Alley, their first album on the Reprise label. It was written by Leo Nocentelli, and though it’s a good tune, apparently the single didn’t chart. It’s one of those songs teaching you a new dance, this one called The Dirt, urging us to “Get nasty.” Its flip side, “Smiling,” is a cool instrumental written by Art Neville. The next single was the album’s title track, and its flip side was likewise an instrumental track, this one an interesting, mellow journey mixing jazz into its funk, titled “The Flower Song” (on this CD titled “The Flower”). The two-parter “Chug-Chug-Chug-A-Lug (Push ‘N’ Shove)” was not included on the Cabbage Alley LP (though it was included on the 2001 CD re-issue as two bonus tracks). It was written by Joseph Modeliste and Leo Nocentelli.

“Hey Pocky A-Way” is a song I first heard by the Grateful Dead. They covered it in the 1980s, with Brent Mydland on lead vocals, though it was titled “Hey Pocky Way.” The Meters released it as a single in 1974, and also included it on their Rejuvenation LP. This tune is a whole lot of fun, with a section that is just percussion and vocals. There are also horns on this one. This single version is a bit shorter than the album version. The other single from this album, “People Say,” is also shorter than the album version, this one two minutes shorter. “People Say” is a funky little gem.

The band’s next album, Fire On The Bayou, provided just one single, “They All Ask’d For You,” but it is an absolutely delightful song, one of my favorites, a bundle of New Orleans joy with even something of a country flavor. The flip side is “Running Fast,” and in this instance, the single is actually longer than the album version. At this point, Cyril Neville had joined the group. “Disco Is The Thing Today” was the lead track from the 1976 LP Trick Bag, and yes, it has a disco beat. It is not their best song, but it’s not bad. Their next single was the title track, “Trick Bag,” which is actually a cover, written by Earl King, and it’s a good one. The last single of this collection, “Be My Lady,” was the only Warner Bros. single that the band released. They broke up soon after its release. (It was more than a decade later that The Funky Meters emerged.)