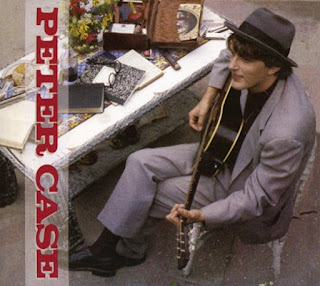 In the 1970s Peter Case was a member of The Nerves (the band that did the original version of “Hanging On The Telephone,” a song Blondie covered), and then after that band broke up he founded The Plimsouls (you can see them perform in a club scene in the film Valley Girl). After the breakup of The Plimsouls (they would later reunite), he embarked on a solo career, releasing his first solo album in 1986. And now that self-titled debut solo album is being re-issued, with seven bonus tracks, most of which were previously unreleased. This is a great chance to go back to the early days of his solo career. Peter Case is a singer/songwriter, but this album is far from being strictly folk. He was coming from playing punk, pop and rock, and all of that music plays a part here. For example, he veers toward pop on a song like “More Than Curious.” This album is mostly original material, written or co-written by Peter Case (with one very cool cover). The album was produced by T Bone Burnett (who co-wrote a few tracks) and Mitchell Froom (both also perform on the album), and it features the talents of musicians and singers like Mike Campbell, John Hiatt, Jim Keltner and Roger McGuinn. This special re-issue includes new liner notes by Peter Case (and yes, it includes his original strange note too).

The album opens with “Echo Wars,” a song written by T Bone Burnett and Peter Case. The first line of the song grabbed me: “Every man is not a king.” This song features some interesting percussion and some nice touches on both guitar and harmonica, but it is Peter Case’s vocals at its heart, with his passionate delivery making this song really work. That one is followed by one of my favorites, “Steel Strings,” in which Peter asks, “Do you want a man of steel/Or do you want a man that’s real?” Wonderful percussion sets the tone for this one; then a certain section partway through has something of the feel of a country tune. The bonus tracks include an acoustic version of “Echo Wars,” and I like this version even more. It was originally included on the 1986 EP Selections From Peter Case.

“Three Days Straight” mixes pop drums beats with blues guitar and harmonica. It was written by T Bone Burnett and Peter Case. “I Shook His Hand” is another highlight, a lively number featuring some cool work on bass and harmonica. This is an early one, written a couple of years before this album was released, and is about meeting John F. Kennedy when he was five years old. The bonus tracks include an acoustic version, which was originally released on Selections From Peter Case. This rendition has more of a raw vibe, and again features some good stuff on harmonica. At its center, “Small Town Spree” also has a great raw acoustic sound, but then nearly a minute in, a string arrangement is added, changing the song’s feel and the way we experience it. It is a truly effective track. I mean, hell, it has a lead section on harmonica, backed by strings. Then “Walk In The Woods” is driven by Peter’s vocals, accompanied by guitar and harmonica.

“Horse & Crow” is another of my favorites, its sound having a very positive bent. “It’s a wonder and a shame/All those careless days have gone.” This one features more wonderful work on harmonica. The bonus tracks include an alternate mix of this song, with electronic drum beat. “Horse & Crow” is followed by “Icewater,” a great blues tune with lyrics by Peter Case and music by Lightnin’ Hopkins. “Well, I fell in love with a millionaire’s daughter/People in hell want icewater.” Oh yes!

The original album concludes with its sole cover, an excellent rendition of The Pogues’ “Pair Of Brown Eyes,” a song that was included on that band’s fantastic album Rum, Sodomy & The Lash and was also released as a single in the UK. This song was written by Shane McGowan.

This expanded re-issue includes seven bonus tracks, five of which were previously unreleased. In addition to the ones I’ve already mentioned, these tracks include “Trusted Friend,” an excellent and powerful acoustic song, his vocals delivered with energy and passion. “When you walked in, I was searching through a trunk/Trying to separate memories from the junk.” “North Coast Blues” is a really good folk song. Check out these lines: “Tear another page off the calendar/That’s about as good as it gets/There’s something here that I’m supposed to do/They ain’t told me what it is yet.” Yeah, I can relate to these lines. “Toughest Gang In Town” is much more firmly rooted in the pop and rock realm. All three of these songs were written by Peter Case.

The CD concludes with a cool early version of “More Than Curious,” a song written by T Bone Burnett and Peter Case. “And nothing ever happens until you start to dream.”

CD Track List
This expanded edition of Peter Case is scheduled to be released on September 16, 2016 through Omnivore Recordings. By the way, I highly recommend you see him in concert when you have the chance.
Posted by Michael Doherty at 2:23 PM