Adventures In Highland Park: A Night In Words And Photos

I used to spend a good deal of time in Highland Park, back in the days of The Peak Show. They threw the best house parties. Last night I was in the same general area, though at a venue I’d never been to before – the American Legion Hall, Post 206. The bill for the evening was The Mekons, Sex Stains, Sam Coomes and Sun Foot. I got there early (I’m always early), and walked in just in time for the soundcheck by The Mekons. It was a brief soundcheck, just bits of two songs: “Abernant 1984/5” and “Millionaire.” Afterward, Sally Timms asked what they needed to move for the other bands, but no one seemed to know. This was the most casual venue ever. In fact, when I went in, the guy at the door didn’t have a stamp, so he just drew a stick figure on my right hand with a blue pen. (And, as I would later discover, the door man was also a member of the first band.)

The venue was basically one large hall, with a stage at one end, and a bar at the other. There was no air conditioning. Two large fans were blowing the hot air around the room. I was told the capacity was two hundred. The show was sold out. It was going to be fucking hot when the people filled the place. Also, I could only find one men’s toilet. And I mean one. There was a hole in the bathroom door larger than my arm, so anyone who had the urge could bend down and take a peek at whatever was going on inside. Two toilets (I’m assuming there was one for women) for two hundred people. Plus the bands. Yeah, apparently there wasn’t even another toilet reserved for the performers. When I arrived, I told the guy that I was on the guest list, and that I was supposed to have an all-access pass. He said it was the same for everybody. I was like, “Oh, okay, I was told I’d have access to the backstage area.” At that point, Sally, who was seated outside while they soundchecked the drums, told me there was no backstage. She said I had access to everything they had access to, except for the stage itself.

The sound wasn’t very good during the soundchecks. The vocals were a bit muddy. And the Sex Stains didn’t soundcheck at all. I stood in various places in the room, and it seemed the best sound was approximately fifteen feet in front of the stage, just off to the right of center (right, from the audience’s perspective). During Sun Foot’s soundcheck, the venue’s sound guy asked Sam Coomes if he had any recorded music to play between bands. I’ve never heard a venue to ask a performer if he had CDs to play over the system. But I wish Sam had given him something, because the sound guy then put on his own personal music, and it was Survivor’s “The Search Is Over.” Dear lord. And he followed that with a live recording of Barbra Streisand. Clearly, he was being cruel and vindictive. Did he realize this was sort of a punk show? I despise Barbra Streisand. It’s not her acting or her music (which I could give or take) that irks me, but the way she charged people $1,500 per ticket for her final show, and then within a year or two was touring again. She should have refunded everyone’s money.

I just needed to ignore Streisand and get into the spirit of the thing. Hell, this was the perfect place for a punk show. No amenities, an amateur vibe, a room that’s falling apart, holes in the ceiling, wallpaper from the 1940s, a scratched up floor, and plenty of enthusiasm from the bands. And the sound guy started playing Styx, certainly an improvement over Streisand (but still an odd choice). As for lighting, there was track lighting in front of the stage. Three lights, none with gels, so basically a white light on the stage. So weird.

At 8:17 p.m., Sun Foot took the stage, with Sam Coomes sitting in on keys. Their first number was like a strong pulse, with vocals not sung so much as spoken, a short message, a thought, “to-make-it-better.” Their songs are kind of like the components of songs, the starting points, and then they would see what could be done when you approach the music from that perspective. I could also hear one of the giant fans throughout their set.

At 8:42 p.m., Sun Foot left the stage, with Sam remaining to perform a short solo set on keyboard and synthesizer (and vocals). I got into it, a strange, sometimes humorous, twisted wizardry. And a Styrofoam head with glowing eyes slowly spinning slowly at his side. He ended at approximately 9 p.m., and then the sound guy decided to subject us to Pink Floyd (no, not early Syd Barrett Floyd, but that dull, horrid shit from later on).

The Sex Stains were up next. I posted a review of their set already, which you can read here. It contains the set list and some photos, but why not post a few more photos here? 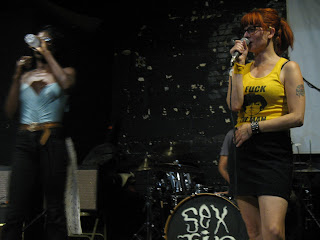 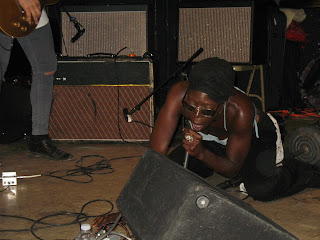 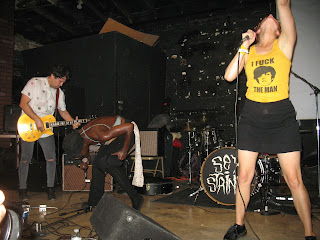 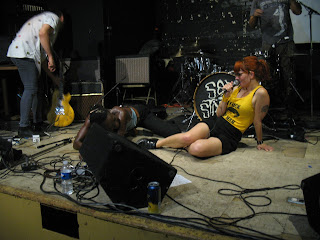 And then The Mekons closed out the night with a fantastic, energetic, joyous set of music. I posted a separate review of their show, which you can read here. That review contains several photos, but hey, here are a few more.

Posted by Michael Doherty at 5:56 PM