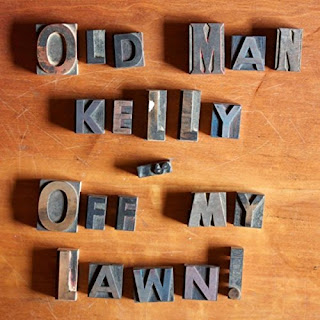 Old Man Kelly is the performing name used by Liam Patrick Kelly, a singer and songwriter based in Blacksburg, Virginia. A former member of the Jugbusters, Old Man Kelly formed Old Man Kelly And The Streetsweepers, and released his first album in 2013. Recently he followed that up with Off My Lawn, an album of mostly original folk and blues tunes, played with a certain joy. Joining Kelly on this CD are Matt Labarge on piano and organ, Chris Printz on bass, Nathan Bowles on drums, Willis Greenstreet on clarinet, Steve Kruger on fiddle and Jenn Barton on percussion. This album is a lot of fun. At its center is Kelly’s commanding voice, a voice from the honky tonks, a voice of the road, part barker, part lover, a voice of country, blues and folk.

Old Man Kelly opens the new CD with “Exitville,” a wonderful, upbeat original tune featuring a great, delicious bass line and some nice work on keys. That piano part by Matt Labarge makes me smile every time I listen to this disc. “Well, they say that life’s a highway/And you can’t just turn around/So if you’re going my way/Baby, let’s push that pedal down to the ground.” Oh yes, onward! This is a song I will be adding to my road trip mix CD play list. It’s followed by “My Next Ex-Girlfriend,” a tune with a delightful old-time feel and more great work on keys. A light, jazzy touch helps to make this a fun track. Adding to the joy of this track is Willis Greenstreet’s work on clarinet. Great stuff.

Old Man Kelly then moves to a more classic blues feel with a cover of “Bootlegger Blues.” It begins at a bit of a distance, like we’re listening to a record on an old player. Then the sound changes approximately forty-five seconds in, like the musicians have stepped from the past to stand right next to us. It’s an interesting effect, bringing the song to the present (or taking us to the past?). This is a song that the Mississippi Sheiks recorded as “Bootlegger’s Blues” in the 1930s. That version featured fiddle, and this new rendition by Old Man Kelly likewise features good work on fiddle, this time by Steve Kruger. And I love Kelly’s blues guitar-playing. That’s followed by another cover, “Milk Cow Blues,” also a blues song from the 1930s. Kelly’s version has a wonderful, groovy full-band sound, with some nice stuff on harmonica. The album’s other cover is “Wild Bill Jones,” a song that’s been performed by Ralph Stanley, Alison Krauss & Union Station, Leftover Salmon and Hot Rize, among others. This version by Old Man Kelly is slower, more thoughtful.

“Devil’s Eye” is an original, raw blues tune, with a back porch vibe, provided the porch is attached to a brothel that is both busy and rocking. Matt Labarge plays organ on this track. Interestingly, Kelly then goes to a gentle, sweet-sounding folk song, “Crayons And A Car Seat” (the verse toward the end always catches me by surprise). And from there, Kelly goes to a fun country rock song, “Knock Her Up,” which Liam Kelly wrote with Camilla Ammirati. (They played together in The Don’t Tell Darlings.) This song features more fun work on piano by Matt Labarge. “You’re afraid to get down on that bending knee/Well, sonny, you can take it from me/No, there ain’t no prison cells as dark and deep/As the one you’ll be in if you let her set you free.”

“Jesus Is My Co-Pilot” has an old folk feel. It’s about hitching a ride with Jesus and the devil, and features some great work on guitar and nice touches on harmonica. “Jesus shouts directions, but the devil’s on the gas/And I’m in the back seat, praying we don’t crash.” The “Still, I wish that Jesus would stop turning his water into wine” line reminds me of that comedy routine in which the guy tells Jesus to quit turning water into wine, as he’s trying to take a shower. That’s followed by a more serious song, “Louisiana Dirt.” “You’ll move on tomorrow, I’ll be here ‘til I die/I don’t know when she’ll forgive me/But I’ve got lots of time.” This is yet another of the disc’s highlights.

“The Murder Of Mir Imad” is a fun, jazzy, groovy track about the Persian calligrapher. Yeah, it’s both a history lesson and a great tune to dance to. The first minute or so is instrumental. If you’re into bands like Squirrel Nut Zippers, you will definitely dig this track.  Willis Greenstreet plays clarinet. Willis also plays clarinet on the CD’s closing number, “Cool Rag,” a wonderful bit of old-time coolness. Have I mentioned that I love this album? There is even some kazoo toward the end of this track. “Takes a red hot mama just to cool me down/An old-time string band to lay me in the ground.”