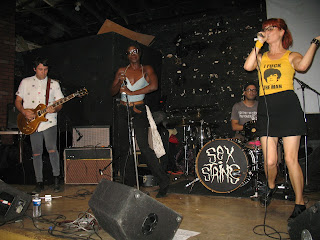 Formed in 2014 and fronted by Bratmobile’s Allison Wolfe, Sex Stains recently released their debut, self-titled CD. They’ve been doing a series of shows to support and promote the album, and last night played a gig at the American Legion Hall in Highland Park, on the same bill with Sam Coomes, Sun Foot and The Mekons. Yeah, it was quite a night. Sex Stains took the stage at 9:23 p.m. During the set-up, Allison Wolfe, dressed in a yellow tank top with the words “I Fuck The Man,” did some stretching on stage to warm up. And good thing too, because once the band started, she hardly was still for even a moment. “We’re from here,” she said. “We’re very honored to play tonight with The Mekons.”

They mostly stuck to material from their CD, but opened the show with “USC,” a song not on the album. They followed that “Land Of La LA,” one of the first tracks I heard from the CD (they released it nearly a month before the CD’s release). After that tune, Allison mentioned that she couldn’t hear herself. Sound was certainly an issue. I know I’m getting old, but I had trouble hearing the vocals throughout the set; that is, I could hear the voices, but often couldn’t make out the lyrics. After “Period. Period.,” Allison said the song was about their periods. Mecca Vazie Andrews added that it was also about punctuation. There is a delicious playfulness about this band.

Allison introduced “Numbers, Faces” as a song about bad dating choices. It was a slower number, and she lay down on the stage, posing at one point during it. You couldn’t help but love her. She has this joyful energy and vibe about her, and a sense of humor as well. “November 9th, that’s my birthday,” she told the crowd, so that someone there would help make sure it’s better than last year. I have no doubt that it will be. One of my favorites from the set was “Don’t Hate Me ‘Cuz I’m Beautiful,” which got the crowd bopping around.

In addition to Allison Wolfe and Mecca Vazie Andrews on vocals, Sex Stains is composed of Sharif Dumani on guitar, Pachy Garcia on bass and David Orlando on drums. Allison announced the band was going to end the set with their two experimental songs, jokingly referring to a CD review which called these two songs experimental. After the first, “Sex In The Subway,” she lay down on the stage for a moment. (By the way, The Mekons would refer to this song at the beginning of their set.) “Crumbs,” the closing number, was a great, energetic tune, and at the end, Allison did the splits. It was a breezy set, eleven songs in twenty-seven minutes, and it left the audience pretty damn happy.

Set List
Here are a few photos from their set: 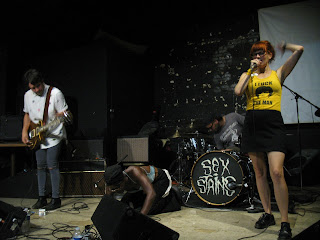 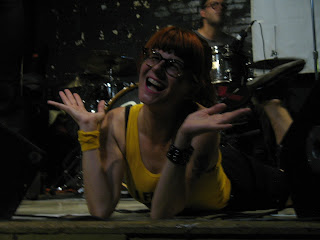 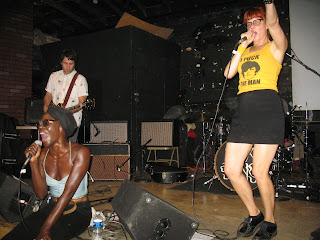 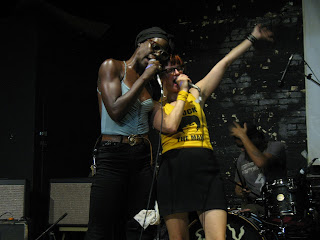 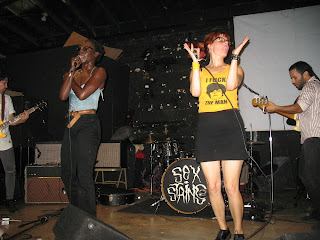 Posted by Michael Doherty at 1:03 PM