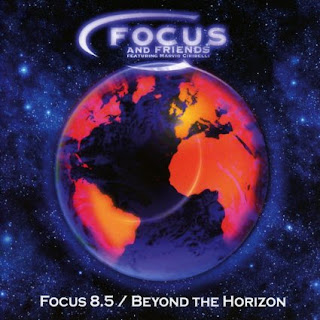 Growing up, I was totally taken by “Hocus Pocus.” Not only is it a great rock tune, but it’s fun to say. Try it: “‘Hocus Pocus’ by Focus.” Right? I had the song on a rock compilation cassette titled Electric Seventies, but for one reason or another, never delved further into the band’s catalogue. Now with the recent release of Focus 8.5/Beyond The Horizon (a title of which I’m not all that fond; the “8.5” makes it sound like an updated computer program, though I get that it is supposed to fit between 2002’s Focus 8 and 2006’s Focus 9/New Skin, having been recorded in 2005), I am getting the chance to become better acquainted with the band. And wow, I’m truly impressed by what I’m hearing. I never would have guessed at what I’ve been missing out on all these years, if this album is any indication of the band’s direction and development. For this album, members Thijs van Leer, Pierre van der Linden, Bobby Jacobs and Jan Dumée are joined by Arthur Maia, Marvio Ciribelli and Marcio Bahia (as well as several other musicians). Thus, the group’s name for this release is Focus And Friends.

Focus 8.5/Beyond The Horizon kicks off with “Focus Zero,” a very cool instrumental tune that opens with some delicious, jazzy drumming before the rest of the band comes in. Thijs van Leer delivers some wonderful stuff on both flute and piano. The song becomes a nice jam, and then a few minutes in, gets mellow and loose, even deliberately messy, with great touches by Arthur Maia on bass. This tune goes in so many directions, each wonderful in its own way, led by different instruments. There is even a drum solo. And I love the moment that features just piano and bass. Some of the sections I wish were developed further, or, rather, I wish they went on longer (even though, yes, at more than ten minutes this is a fairly long track as it is). “Focus Zero” was written by Thijs van Leer and Pierre van der Linden.

It’s followed by “Hola, Cómo Estás?” which was written by Thijs van Leer and features Marcio Lott on vocals and a wonderful groove on bass by Bobby Jacobs. There are also some angelic vocals which rise over that great groove, for me making the song something special. Those vocals are provided by Marvio Ciribelli, Mylena Ciribelli and Thais Motta. The song then changes toward the end, becoming more of a bluesy rock tune, especially that guitar work by Jan Dumée. “Rock 5” is mellow at the start, with some nice stuff on keys and more wonderful vocal work by Thais Motta and Mylena Ciribelli, then picks up a joyous Latin rhythm. This tune changes, taking on an urgent, insistent, frenetic energy, then sliding into a delicious jazzy piano section. Marvio Ciribelli wrote this song, and plays piano on it. That’s followed by “Millennium,” written by Jan Dumée. I can’t get enough of these delicious Latin jazz grooves, and this track features some excellent work on guitar by Dumée, as well as a nice long drum solo by Pierre van der Linden and Marcio Bahia, with Amaro Junior and Favio Santos on percussion. Totally delicious!

For some reason, “Inalta” sounds to me like theme music to some 1970s television series, like during a chase toward the end of an episode, with the bad guy’s car slamming into well-placed bales of hay or going off the pier, and the hot chick rushing into the arms of the hero, as the camera pulls back and the credits roll. It was written by Marvio Ciribelli, and features Fabiano Segalote on trombone, as well as more great work on drums, bass and flute. “Talking Rhythms” is divided into two parts, the first part being all percussion. This section is titled “Conversation Of Drums,” and is Pierre van der Linden and Marcio Bahia. In the second section, “Conversation Of Drummers,” those two provide vocals, but their voices are used almost like percussion, imitating percussion instruments. It’s completely wonderful, and ends with some natural laughter.

The disc concludes with “Surrexit Christus,” an interesting track, adapted by Thijs van Leer, based on the work by Jacob Clemens non Papa. This track transports us to another land, a strange, mysterious land peopled by truly exotic dancers and shamans, a land of beauty and magic. It then gets funky, and surprisingly ends up being one of my favorite tracks.

CD Track List
Focus 8.5/Beyond The Horizon was released on July 8, 2016 on In And Out Of Focus Records.
Posted by Michael Doherty at 6:45 PM